The technology industry is in the later innings of a broad innovation cycle, while the dealmaking cycle is still running hot, in a common concurrence. The incumbent tech giants—Amazon, Facebook, Netflix, Apple, Alphabet and Google (FAANGs)—continue to enjoy monolithic positions in their core markets, yet their primary product lines remain, by and large, the same while they seek to access new markets. Across the globe, Baidu, Alibaba and Tencent (BAT) hold much the same position in China and, increasingly, beyond its borders. Consolidation is still running rampant across the market, bolstered by the incumbents’ efforts to stay abreast of technical developments. "Buyers are always looking for ways to accelerate top line growth, particularly for recurring revenue streams," says David Van Wert, partner in transaction advisory services at RSM US LLP. "Ideally, operating expenses follow an inverse relationship through cost rationalization, restructuring and synergies from combining with another company at the time of acquisition or through add-ons."

In the end, technology is an enablement of traditional methods of doing business, and as applications proliferate, software continues to eat the world, to borrow Marc Andreessen’s famous phrase. However, as software continues to replace the lower rungs of automated tasks, the innovation cycle is slowing, as hardware catches up and more difficult technical challenges, such as more sophisticated artificial intelligence (AI) programs to help thwart cyberattacks automatically, persist. Advances are being made, but for now, the continued consolidation in key segments, as well as amount of capital flooding into dealmaking and venture investment, signal that the next innovation cycle is largely in its early stages. The main trends for the middle market, in particular, are currently consolidation, integration and increasing private equity (PE) buyer activity, and this state of affairs does not look set to change anytime soon.

The narrative of synchronized global growth is shakier than ever, as troubling macrofinancial trends among sovereign debt loads and contentious political topics such as trade, not to mention China’s uncertain path forward, are all combining in a potent mix. That said, such an environment may only encourage mergers and acquisitions (M&A) even further, as companies look to get deals done now before additional and potentially negative factors come into play. The ceaseless rise of equities continues to fuel M&A among tech companies to a significant degree as well. Thus, from a macroeconomic perspective, the tech M&A cycle looks primed to remain resilient.

When it comes to dealmaking conditions, however, the level of multiples being paid within the marketplace for tech companies, particularly those with recurring revenues that can justify significant, forward-looking revenue multiples, could dissuade would-be acquirers at some point. "Pricing remains high," states Van Wert, "propped up by highly competitive auction processes." PE buyers will continue to prop up volume, but focus on the smaller end or middle segment of the market, barring the occasional growth equity stake such as the recent $400 million investment in marketing company AppLovin by KKR. Accordingly, volume may diminish somewhat going forward, even as aggregate deal value remains robust given inflated multiples, but remaining within historically strong levels. "It’s a sellers’ market; and in addition to record multiples, sellers are demanding shorter processes," says Alex Weiss, partner in transaction advisory services at RSM US. 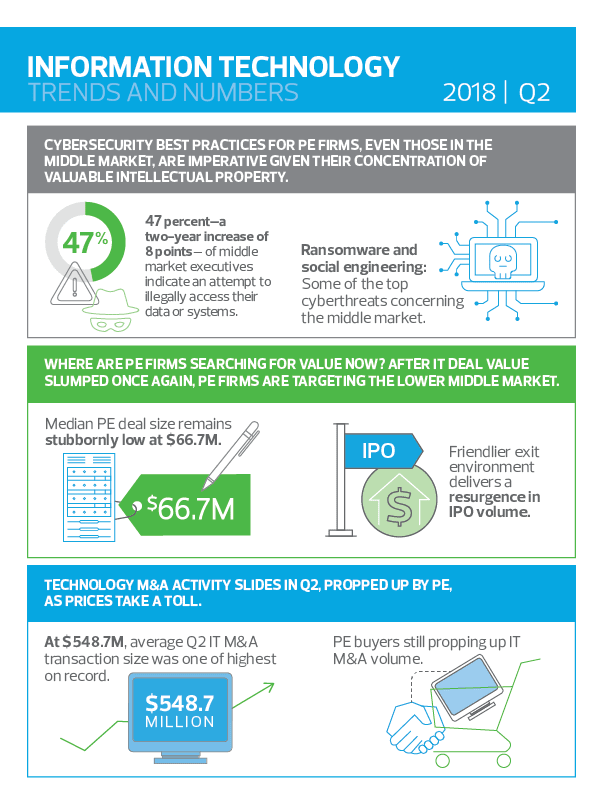