After a nearly record-breaking year in deal value, the mergers and acquisitions (M&A) cycle in information technology (IT) has shown signs of slowing down. Through H1 2019, $257.4 billion in aggregate deal value have been recorded in Europe and North America across 1,554 transactions. That means the full year will likely record less deal value than in 2018 or 2016 while representing a sizable decline in overall volume. However, these diminished figures must be put into historical context. The four-year run from 2015 through 2018 was remarkable for the sheer volume of activity, with nearly 4,000 deals completed annually. Even if 2019 fails to keep pace, it should still post results that are historically robust. In short, the M&A cycle is far from crashing; rather, it appears to be moderating after an unusually intense period.

Multiple factors, both cyclical and secular, are contributing to this moderation. High prices exert a subduing effect in any heated environment, and IT multiples have been at or near record highs in general. Following the first significant waves of consolidation in key segments—e.g., semiconductors—and the software-as-a-service (SaaS) proliferation earlier this decade, a period of relative calm is now occurring, given the transition to cloud-based services is widespread. The next phase of the M&A cycle may already be in its early stages, as the groundwork for new technological adoption, such as the fifth generation (5G) of wireless networks, begins to proliferate.

“The US and global economies are experiencing one of the longest periods of growth in recent history,” stated Alex Weiss, partner with transaction advisory services at RSM US LLP. “Well-founded or not, there are persistent concerns that could end; fortunately, the technology industry tends to be more resistant, given software and systems are critical to operations.”

On the dealmaking side, as prices eventually subside and overall M&A cools, potential dealmakers will be encouraged to pick up the pace again. Strategic and financial buyers still have near-record amounts of capital on hand, while the cost of capital remains extremely cheap by historical standards. With ample means, the limited supply of choice targets will be the primary constraint for market dynamics. The role of the next generation of tech companies, as they go public and likely embrace more acquisitions, presents another interesting key factor to watch. For example, Uber started acquiring companies before its IPO; now, as a listed company, it could well bolster the scope of its offerings by engaging in additional M&A of midsized IT companies. 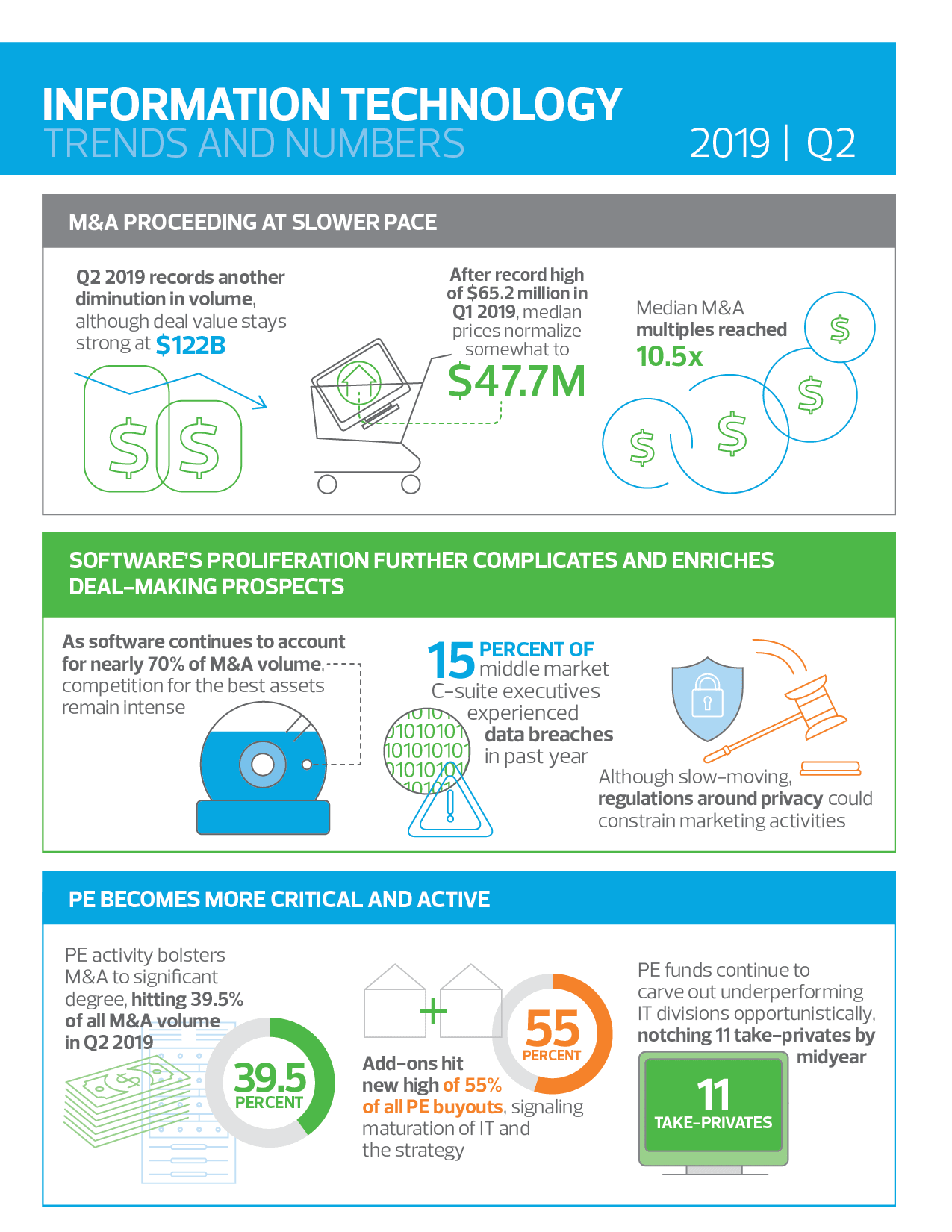