New international rules on exchange of information in tax matters

This information can be of personal or professional interest for you

Since 2008, due to the financial crisis, the necessity for governments worldwide to increase their tax receipts has placed the fight against cross-border tax evasion at the heart of political debates.

Aware that it was indispensable to play by these new rules in order to maintain a strong and competitive domestic financial industry, the Federal Council (Swiss cabinet), has since 2009 joined the international efforts to fight against tax fraud and evasion.

I. The OECD/Council of Europe Convention on Mutual Administrative Assistance in Tax Matters

This convention offers a framework agreement for the cooperation in tax matters between states and is applicable to all kinds of taxes (notably revenue, corporate income, wealth, capital, donations, heritages, VAT) including mandatory social security contributions, namely pension, invalidity and loss of income insurances in Switzerland.

The Convention has been signed by Switzerland on 15 October 2013, but it declared to be willing to apply it only to the following taxes: revenue and wealth, corporate income and capital at federal, cantonal and communal level as well as to the withholding tax.

As of today, the entirety of the G20 member states and nearly all members of the OECD have signed this convention, which provides for three different kinds of exchange of information:

more information on that matter

These AEOI rules govern the routinely and intervallic exchange of information concerning persons (individuals and corporations) being subject to taxation in one state and and who have a bank account in the other state. In particular, they govern the modalities of the exchange, for which two models are available:

The requisite information is in both models collected by financial institutions in the signing countries and transferred to its tax authorities, which in a second step communicate them to the tax authorities of the other contracting state. Model 1 corresponds to the standard treaty model by which two countries conclude an agreement on the automatic exchange of information AEOI. Model 2 however is an additional agreement allowing all contracting states to implement the AEOI in a uniform manner in all contracting states. The basic idea of the MCAA is a multilateral application of the AEOI with the possibility of spontaneous exchange, allowing for a quicker and more efficient introduction. Its main benefit for states is to avoid the need to renegotiate the entirety of signed agreements every time the interpretation of a particular norm has changed.

However, the two models are considered to be equivalent for the introduction of the automatic exchange of information, and can therefore be applied in parallel.

The information that will be exchanged comprise the balance of the account, all capital revenue (capital gains, interests and dividends) as well as the identity of its beneficiary owner. Financial institutions will thus collect a vast range of information of their clients, and transfer them to its national tax authority, which will subsequently transmit it to its foreign counterpart. 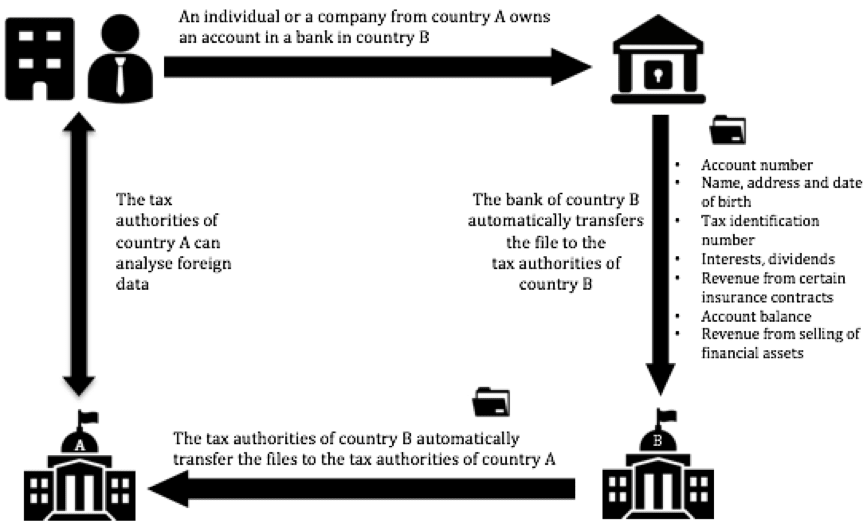 As of now, around 100 states have committed to implement this new form of automatic exchange of information in tax matters.

If the vote in Parliament, and possibly the referendum, will have a positive outcome, Swiss banking institutions could begin to collect data on their clients living abroad, with the first actual exchange of information scheduled for 2018.

By that procedure, banking secrecy will not be applicable anymore for clients who are residents in countries that participate in the exchange of information.

Bank secrecy however, will only be lifted in international cases. Swiss tax authorities will still not be permitted insight in bank accounts of Swiss residents, be they foreigners or Swiss nationals, provided that Parliament will not introduce legislation amending domestic banking secrecy. On the other hand, a Swiss resident who owns an account abroad in a jurisdiction with which Switzerland has concluded an agreement on the automatic exchange of information, he might come under scrutiny of the Swiss tax authorities.

Questions regarding how a client spends his money or which financial products he invests in are confidential information and will subsequently not be communicated. The entire process is subject to privacy protection and the exchange is authorised for tax purposes only. Thereby confidentiality of financial data that is in conformity with tax legislation is maintained.

Before being actually applied, the AEOI must be concluded between the concerned states, and then be activated by means of a notification to the secretariat of the coordinating body.

Every state can deposit a list with states with which it would like to apply the AEOI, when signing the MCAA or later.

The selection of a contracting partner state will require a thorough analysis for Switzerland. For the time being, the Federal Council has told that that it would like to contract in priority with the United States and the European Union. Concerning other countries, it is the Federal Council’s intention to favour states with which already double taxation treaties or Exchange of Information Agreements are in place. Switzerland will take into consideration the respect of the law and is likelier to engage with countries to which close economic and political ties are already established. These states may put in place procedures for clients wishing to regularise their past situation.

The conformity of national implementations with these new sets of rules will be supervised by the Global Forum on Transparency and Exchange of Information for Tax Purposes, that currently has 120 member states. Likewise, a member state will have the possibility to denounce a bilateral treaty in case the other state acts inconsistently with the agreed rules.

Apart some reservations of minor importance on the rules of the AEOI, Switzerland has further declared two points: first, to inform any person affected by an exchange of information before any data is transferred. Second, not to pursue a foreign authority’s request to undertake a tax control in Switzerland.

But the aforementioned AEOI agreements are of reciprocal nature. Therefore, foreign financial institutions running accounts of Swiss residents are as well obliged to deliver data on their holdings. The Federal Tax Administration is going to receive them, by electronic and encrypted transfer via the tax administration of the corresponding country. To identify each of the clients, the data will be linked to the Swiss Social Security Number. The Federal Tax Administration, however, since it’s not allowed to tax individuals, will only sort out the data and transfer it to the respective cantons. This should also take place by electronic means. In order to safeguard privacy, international task groups will examine the security standards of the participating countries.

The transferred data are gross data, that is only the sum of, to give an example, capital gains or dividends are displayed. No breakdown of the single assets will be available to the recipient. The basic idea is to provide evidence to the tax authorities that the persons subject to taxation have enclosed all relevant documents. The data will therefore not be apt to serve as a base for direct taxation.

The Federal Implementation Act has been approved in early December. The international bilateral agreements and the MCAA need yet to be approved by Parliament. If its outcome will be positive, as well as the potential referendum, the concerned Swiss financial institutions could start to collect data on their clients living abroad in 2017. The first exchange of such data could take place in 2018.

Don’t hesitate to contact us if you would like additional information on the matter of this newsletter or if you have questions on the impact of the entry into force of the new exchange of information in your situation.

As of now, the following jurisdictions have committed to automatically exchange information: