On 22 December 2021, the European Commission unveiled a Directive proposal aiming at promoting an efficient and fair business tax system for the European Union.

Following the anti-tax avoidance directive (“ATAD”) and the directive on administrative cooperation (“DAC”), the European Commission is willing to propose a new directive to directly target legal entities with no minimal substance and economic activity. The results of such structures are to lower the taxpayer’s global tax liability.

This proposed new directive also known as “ATAD 3” comes to reinforce the Base Erosion and Profit Shifting (“BEPS”) initiative and bring more coherent EU approach against tax evasion and avoidance.

ATAD 3 will mainly target and capture all companies and structures that can be considered as resident of a Member State for tax purposes but, in reality, do not perform any economic activities. Their presence is only justified to allow certain tax advantages to their beneficial owner or to the group to which they belong. An example is provided in the Directive proposal in which: a financial holding may be set up to collect all payments from financial activities of other group companies in different EU Member States, taking advantage of the exemptions from withholding taxes of the Interest & Royalty Directive and then transfer this income to associated enterprise(s) in low tax third country jurisdictions with the aim of exploiting favourable tax treaties. ATAD 3 will, therefore, help Member States to identify companies that are effectively tax residents, engaged in economic activities but do not have substance or at least minimum substance in the country by applying a certain test. This test will be referred to as “substance test”.

Companies failing to succeed in this “substance test” will be considered to have no substance in the country and will be deemed to “shell companies”.  However, the company will be granted the possibility to claim a rebuttal of a presumption of shell. The company will then have to produce concrete evidence of the performed activities and how.

The approach: the seven-step process

A seven-step process will have to be followed in order to determine whether or not a company has a minimal substance in a Member State:

As soon as this reporting obligation (as stated above in Step 2) is transposed into the national legislation, penalties will be applied and will be set down by the Member States against the violation of this reporting obligations. As recommended by the European Commission, the penalties shall be effective, proportionate, and dissuasive. Moreover, an administrative pecuniary sanction of at least 5% of the turnover should be included in the financial penalty.

It is aimed to first adopt this proposal as a Directive, and therefore transpose it into Member States’ national law by 30 June 2023. This will come into effect as of 1st January 2024.

It is clear that the draft Directive is an important change in the landscape of international taxation. Certain structures which were common in the past, do probably not meet in certain circumstances the requirements as included in the draft Directive.  Additional taxation will be possible in that case. RSM Belgium can assist you in analysing the impact of the new rules for your companies. 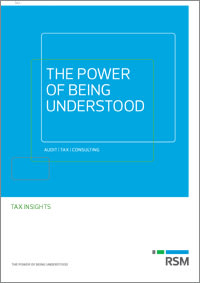