On Wednesday, 7 February, RSM Thailand Tax Services in collaboration with Mr. Stephen French of MMT Accountants & Advisers, a business advisory practice with offices in Sydney Central Business District and Hurstville and Mr. Stephen Caswell an economist and qualified accountant of Caswell Consulting in New South Wales sponsored the first 2018 Australian Thai Chamber of Commerce Sundowner Networking Function. Prior to the networking event, a seminar was conducted by Mr.  French and Mr. Caswell covering various taxation and superannuation changes and proposed changes which most importantly are likely to have serious effects on Australian-Expatriates. This edition of RSM focus deals with the topics covered at the seminar.

There are many people who have moved overseas and own their “main residence” who believe that their home is not subject to any taxes and this may not necessarily be the case. An Australian-Expatriate’s ‘main residence’

(his or her home) is generally exempt from capital gains tax (CGT).

Generally, a dwelling is considered to be an Australian Expatriate’s main residence if:

Currently, if an Australian-Expatriate moves out of his or her main residence, he or she can choose to have that home remain as their ‘main residence’ for tax purposes. Even if they rent it out. This is called the temporary absence exemption. They can do this for up to 6 years if they rent it out (the “6 year rule”), and indefinitely if it is not rented out.

In every budget, there are winners and losers, but sadly Australian Expatriates and non-resident Australians living and working overseas were the clear losers in this budget. For several years now the Australian Government has introduced legislation targeting expatriate and foreign residents. The 2017-18 budget continues that focus with further changes that will have a significantly negative impact on non-residents, particularly those who own a main residence back in Australia.

Removal of the main residence exemption for foreign residents:-

In July 2015, Jon & Dany, moved from their home in Sydney to Bangkok. Since moving, they have rented out their property and continued to treat their Sydney home as their main residence. On 4 September 2019 while remaining non-residents, they exchange contracts to sell their Sydney home. What would Jon & Dany’s tax implications be under the current law and then under the proposed changes?

Currently, Jon & Dany could apply the absence rule for up to 6 years to treat the property as their main residence.  As the current law allows for foreign residents to apply the exemption, no tax will be payable on the sale.

As Jon & Dany were foreign residents at the time of the sale they are:

NOT entitled to the main residence exemption.

This means they will have to pay Capital Gains Tax (CGT) on their gain.

This outcome is not affected by:

What to do next?

What are the investment benefits of becoming a non-resident? 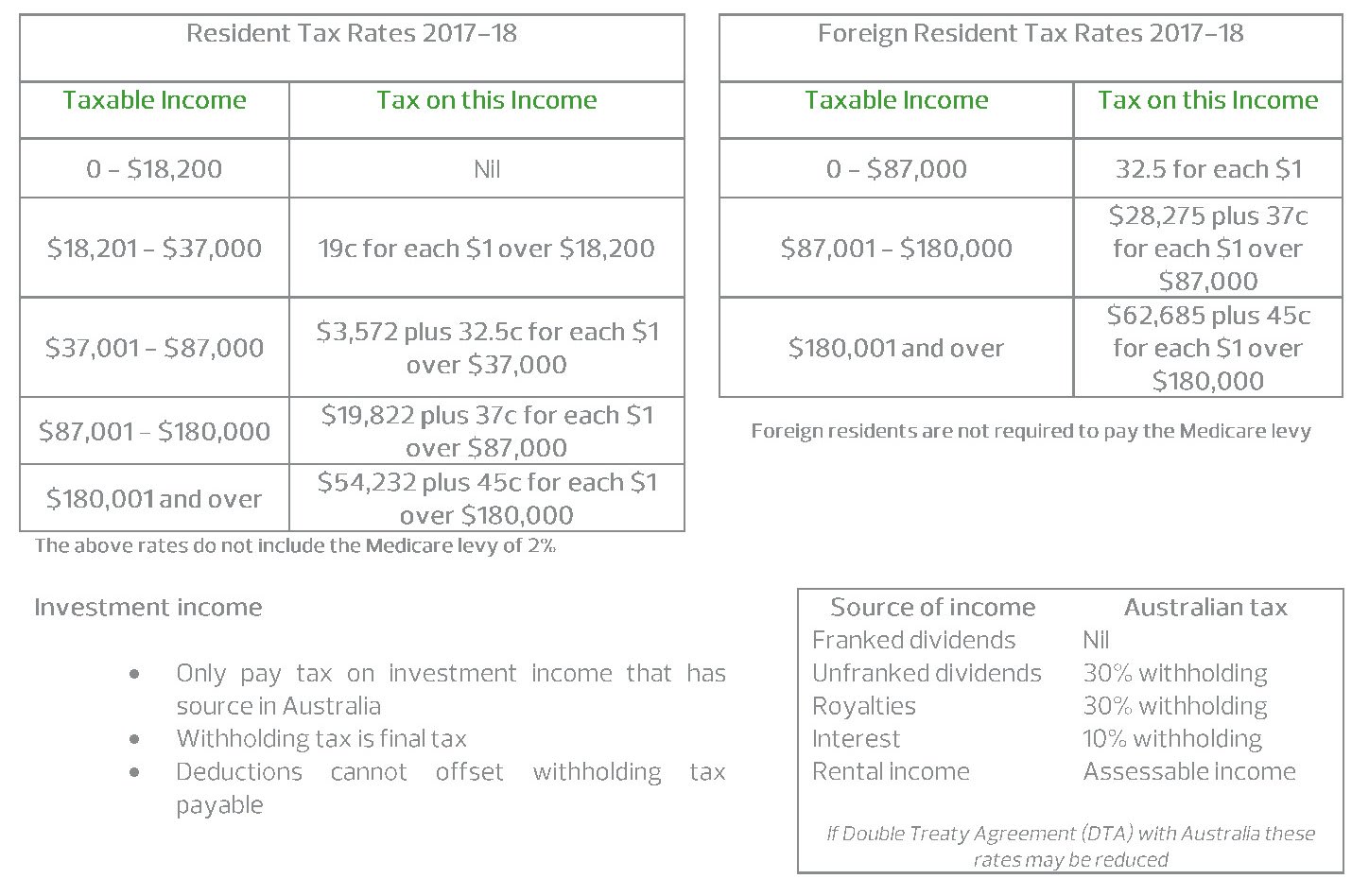 What happens to an Australian’s superannuation accounts when they move to work overseas? Are there any benefits of maintaining or growing Australian based investments, including superannuation?

Even where there is no intention of returning or ever living in Australia again is it worthwhile commencing or continuing income stream?

Is Australia the new tax haven for seniors around the world?

When planning to return to Australia what do I need to do?

Should assets be realised prior to returning to Australia and becoming a resident again?

What is an excluded entity?

An excluded entity is a:

Barney who lives in Bangkok owns a residential property in Sydney which he currently rents out. During the 2018 financial year Barney was required to travel to the property to repair damages caused by his tenants. He incurred travel costs for airfares, accomodation and meals during his stay in Sydney.

As the investment is a residential property and the expense was incurred after 30 June 2017, Barney therefore cannot claim the travel expense.

What this means for expatriates is that airfares and other costs to travel back to Australia to inspect their properties will no longer be available from 1st July 2017.

In simple terms, the FRCGW is a withholding tax that affects vendors disposing of certain taxable property which assists the ATO in receiving payments for foreign residents’ Australian tax liabilities.

When does a non-resident need to lodge an Australian Tax Return?

Generally speaking, the Australian-Expatriate will only be taxed on their Australian-sourced income and will only need to complete a tax return if they earn the following types of income:

Just to clarify, Australian–sourced income streams on which tax has already been withheld, such as interest, dividends or royalties, will not require the completion of a tax return.

Mr. Stephen French and Mr. Stephen Caswell are long time visitors to Thailand having Australian Expatriate client portfolios there as well as other parts of South East Asia. They are both regular contributors to the Australian Thai Chamber of Commerce (“Austcham”) publications as well presenters at various Austcham Seminars. They also have a close affiliation with RSM Thailand. A great deal of the content of the subject matter of this article raises questions which would be too time consuming and lengthy to deal with properly in this month’s RSM Focus. Therefore, we have included below the contact details for both MMT Accountant & Advisers and Caswell Consulting and suggest that readers should contact Messrs. French and Caswell directly to obtain Australian taxation and superannuation consulting advice. 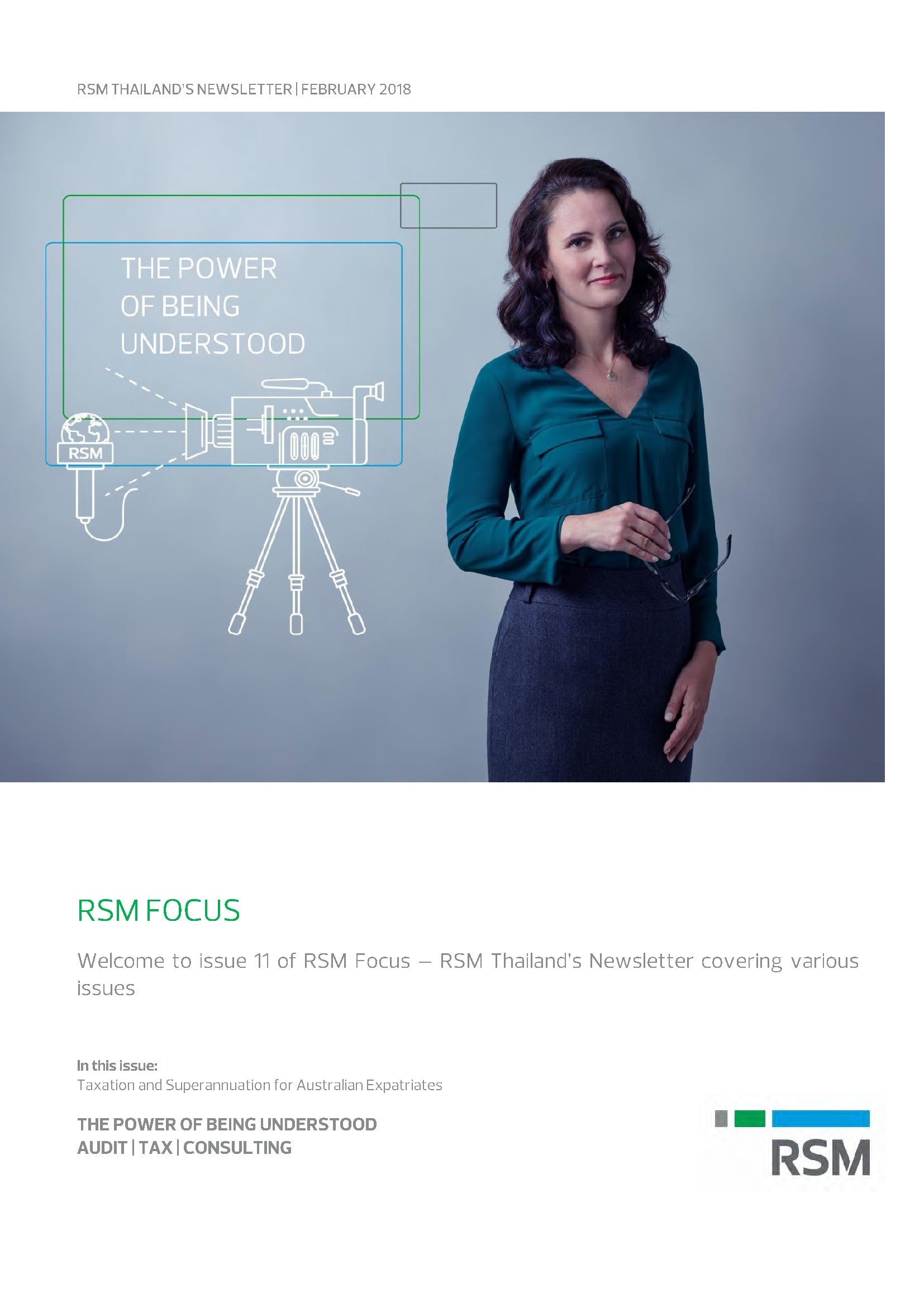