Rafa Bravo, a resilient look towards 2023

For those who don't know him, Rafa Bravo is the Director of Special Projects at RSM Mexico who has been part of RSM for more than 11 years. Outside of work, Rafa has also been dedicated to the sport of open water swimming for 25 years.

In 2020, when he decided to take part in the Triple Crown (which is marathon of swimming challenges consisting of three important open water swims), we realised that accompanying him on his journey of courage and discipline would also be a great learning and teamwork experience for all of us. Following his every stroke, we watched him complete the challenging 20 Bridges of New York swim in 2021, teaching us about the power of resilience and how to adapt to an ever-changing environment. 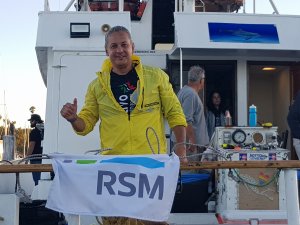 On 7 July 2022 at 11 pm, Rafael began his attempt to cross the Santa Catalina Channel in California, seeking to complete the second leg of the Triple Crown. After four and a half hours (12.2 km) of swimming at a good pace, he suffered from severe dehydration, preventing him from moving forward and, for health and safety reasons, decided to withdraw from this challenge.

“Although at first, I wanted to continue despite the conditions in which I found myself, the best thing for me was to abandon the swim. Someone once told me, ‘if the sea can sink ships, imagine what it can do to you’. Yet, the truth is that resilience always wins, as well as the desire to try it again. I learned much more from this swim than from any of my successful swims,” said Rafa Bravo a few hours after leaving the water on 8 July. In life, and in the accounting profession, it is rare to achieve success without learning from adversity.

After not being able to complete a swim for the first time in more than two decades, Rafa has his sights set on 2023 to try it again. I approached him to talk about Santa Catalina and what he learned from his experience.

Now that a few weeks have passed since Santa Catalina, what happened?

Rafa: A bad last-minute decision turned into a big mistake as the hours passed. These swims only allow for 30-second breaks to take in supplies of carbohydrates, and electrolytes, to avoid the risk of hypothermia. Normally, I would take the supplies in an equal 1:1 ratio (carbohydrates to electrolytes), but this time, due to the demands of the swim, my coach suggested changing it to 3:1. I knew my body wasn't used to that, but I gave in. That was my mistake, not trusting my inner voice. Two hours into the swim, I began to vomit continuously. Despite this, I continued swimming for another two and a half hours, which caused me severe dehydration.

What went through your mind when it became clear that you had to make that drastic decision?

Rafa: Two hours into the swim I began to feel bad and used all the mental and meditation techniques that I have practiced during these months of training: introspection, visualisation, talking to myself, I even started to sing. I continued swimming as I felt my arms and legs cramping, my muscles going numb, and I began to feel the temperature change in my body - the warning signs of hypothermia. My strokes dropped from 58 to 42 per minute, and my heart rate went up. While it is true that you must learn to read the signals of the sea to adapt your swim, you must also read your body’s signals. At that moment, I understood that the only expert on me is me, and no one can change that. Those two hours of resilience and continuing to fight gave me the opportunity to make peace with the idea of abandoning the swim for my integrity and safety, it is one of the most extreme sports practiced in the world after all.

What was your internal experience swimming in the sea at midnight?

Rafa: The sensation of swimming at night is something unmatched. When swimming normally, I feel almost as if I am flying; in the midst of the immensity of the ocean and total darkness, I felt defenceless but at the same time unbeatable. At the beginning, there was a crescent moon and I could only see the small light of the kayak that followed me. By 1 AM in the morning, it was total darkness. Despite feeling very bad, I was able to swim those last two hours thanks to the mental strength I had inside and the emotional power that comes from swimming in the dark in an uncontrollable environment. It was then that I understood my mistake would be totally under control next time. Yes, next time. Because I am convinced that life gives you second chances. It was a decision made from critical thinking, maturity, and good sense.

After this experience, what do you consider to be the key to overcoming obstacles?

Rafa: In the end, it all comes down to “Win or learn, never lose”. This swim has given me a huge learning experience in every way: physical, mental, maturity, and fellowship. Seeing you all smiling and hugging me after the swim, saying "Let's go for 2023", helped me confirm that everything I had processed in the middle of the sea the night before was true and that it was the best decision. The confidence of making a mature and honest decision gives you the strength to move forward and overcome obstacles.

Sport can give us great lessons to use in our personal, professional, and business lives. Rafa's experience shows us that sometimes it is okay to try and fail; it is the courage to pick yourself up and try again that truly counts. If you are fortunate enough to be accompanied by a team that supports you and encourages you to move forward, even better. A group of Partners and colleagues from RSM Mexico, RSM US, and RSM Latin America travelled to Los Angeles to support Rafa and wish him the best of luck during this feat. "The mere fact of having tried makes Rafa a winner," said Alfonso Elías Bornacini, President of the Board of Directors of RSM Mexico. ““Anything worth achieving comes with challenges and overcoming those challenges makes us stronger.  The courage to persevere is what sets us apart. Let’s go for 2023, Rafa!””, commented Eileen Turkot, Regional Leader of RSM Latin America.