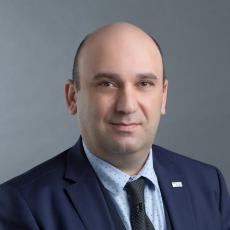 Giorgi Kvinikadze founded audit, tax and advisory company “Capto Group” (rebranded in 2015 – as “RSM Georgia”) in 2008. He is a General Director and Managing Partner of RSM Georgia, which is a member of RSM International since 2011.

Giorgi’s experience covers more than 25 years of professional experience in Financial services. After graduation, Giorgi started his banking career in JSC “TbilCredit Bank”, later he moved to Bank “Rioni”, then joined JSC Bank “Tbilcombank” team. From 2000 to 2005 he served as a Finance Director in Wissol Group, which is the leading petroleum and gas provider in Georgia. After that he moved to one of the biggest construction Companies - “Nola” LLC to lead the finance department.

Giorgi has a wide range of experience in many diﬀerent industries, he was the initiator of many projects and cooperated with such institutions as EBRD and IFC.

Board member of Georgian Federation of Accountants and Auditors

Certified auditor authorized by the Service for Accounting, Reporting and Auditing Supervision of Georgia