George Themistocleous, Managing Partner and CEO of RSM Cyprus, on the cover story of Gold magazine, discusses with the other business leaders forecasts and ideas regarding what the new year holds for the Cyprus Economy and their sector.

As Marianna Nicolaou and Athena Yiazou stated in their cover story, "The end of the year is always a time for reflection on what has happened in the last 12 months and for hopes, wishes, and expectations for the next 12. We, therefore, invited 10 business leaders to share their thoughts in a discussion that was unsurprisingly dominated by the threat of inflation and how soaring energy prices have battered the EU due to Russia's invasion of Ukraine, as well as more positive hopes and expectations for 2023." 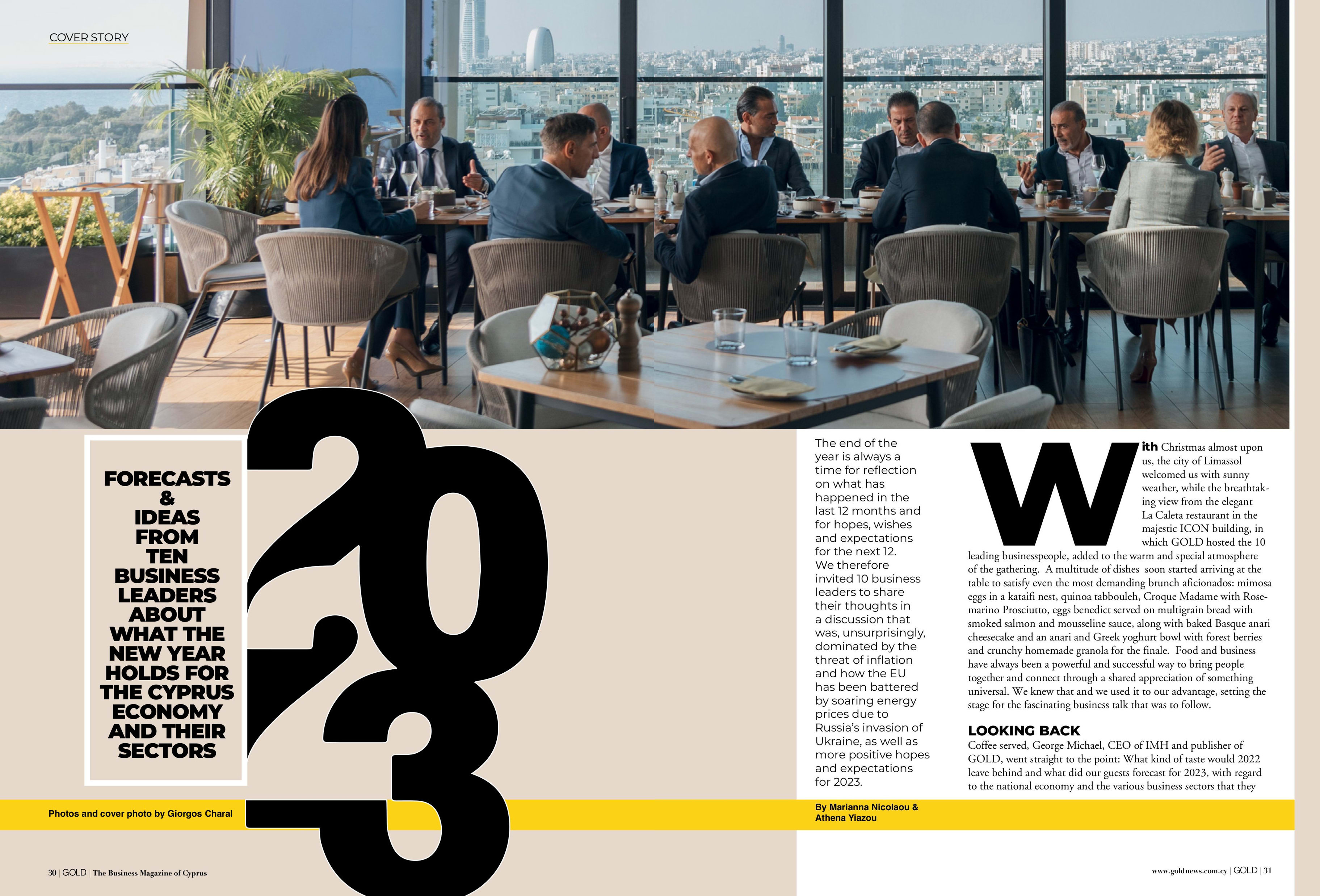 When Mr. George Michael, CEO of IMH and publisher of GOLD asked what kind of taste would 2022 leave behind, Mr. Themistocleous said that "After the war, the financial services industry in Cyprus, will never be the same again.

The sector in Cyprus, which was heavily dependent on Russian and Ukrainian companies, has been hit by the interruption brought on by the war in Ukraine. Added to the sanctions imposed by the European Union, many business experts in the sector have been forced to change their focus and look for other possible target markets."

When the discussion was driven toward Cyprus' economic resilience, all leaders unanimously agreed that the Cyprus Economy had overcome all the unexpected challenges that arose in 2022.

Mr. Themistocleous added that the real GDP grew by 6.3% as opposed to the corresponding period in 2021, primarily due to domestic demand. Dynamic private consumption growth during the year was driven by increased employment and savings accumulated during the pandemic.

As the discussion continued and reached the point of looking ahead to growth prospects, he agreed with the other leaders that technology needs to be a key component of Cyprus' strategies for future development and other areas together with diversification.

In his view, "The long-term diversification of our economy and its ongoing modernisation may generate growth opportunities. Prioritisation should be given to green energy, innovation, and digital technologies since they can replace Cyprus' traditional practices of contracting business."

He continued by saying that greater emphasis should be placed on people and the advancement of financial literacy.

"Focusing on people is the key to driving businesses to growth and success. Still, business culture is also important to consider if we are to increase business potential and improve the country's competitiveness. There is a lack of education on financial matters among the younger generations, which does not help create a solid business culture. He went on to say that, while not everybody expected to be leading a business in the future, it is at least expected that everyone will be able to handle their personal or family affairs financially rationally. This requires a financial and business culture to maintain a sustainable economy in the future."