The Dutch fiscal unity regime may be adjusted and become less attractive. This might be the consequence of preliminary questions submitted by the Dutch Supreme Court in two proceedings to the Court of Justice of the European Union (CJEU) on 8 July 2016. The preliminary questions concern the compatibility of the Dutch fiscal unity regime in the Dutch Corporate Income Tax Act 1969 (Vpb) with the right of free establishment under EU law. The Advocate-General (A-G) at the CJEU issued opinions in both cases on 25 October 2017. An opinion issued by the A-G at the CJEU is a recommendation to the CJEU regarding the manner in which the CJEU should hand down a judgment in a specific case.

The two proceedings concern an interest deduction restriction in the Netherlands (Article 10a Vpb) and the non-deductibility of exchange losses. In the first proceeding regarding the interest deduction restriction the A-G concluded that Dutch law, in principle, infringes the said EU legislation. Within a fiscal unity no tainted transactions are recognised, which means that the interest can be deducted in full. Cross-border situations, however, do not qualify for this advantage because the fiscal unity is limited to national situations. In light of this, a restriction on interest deduction in cross-border situations is more likely to occur than in national situations (see illustration below).

In the second proceeding concerning the non-deductibility of exchange losses, the A-G has issued an opinion that is positive for the Netherlands. It seems that according to the A-G, there is no direct relationship between the rules on currency exchange losses and the fiscal unity in this specific situation. The question remains whether the CJEU will agree with the A-G’s conclusion. In the event that the CJEU finds that Dutch law does in fact infringe EU law, this implies that it will have to be decided for each legal provision whether entering into a fiscal unity will have consequences for the application of that provision.

Because the conclusion of the A-G may have a negative impact on the Netherlands, the Dutch State Secretary for Finance has announced emergency response measures in the event that the CJEU decides to follow the A-G’s opinion.

The per element approach could namely have the consequence that certain elements of the fiscal unity regime will result in the same favourable treatment in comparable EU situations, which would make it easier for companies that operate internationally to lower the taxable basis in the Netherlands. However, from a OECD and EU perspective, the Netherlands aims to prevent such a lowering of the taxable basis.

For this reason, the Dutch State Secretary for Finance intends, if the CJEU follows the A-G’s negative conclusion for the Netherlands, that, even after the CJEU has handed down its decision, the advantages must be withheld in EU situations. From a legal perspective, this will only be possible by being stricter with respect to domestic situations. Therefore, the legislation will be amended by means of emergency response measures - should the CJEU accept the per element approach - in such a way that in any event the probably most vulnerable elements of the fiscal unity in a domestic situation will no longer result in more beneficial treatment than in a comparable EU situation. More specifically, this will have an impact on, among others, Articles 10a Vpb (interest deduction restriction), 13 Vpb (participation exemption), 13I Vpb (excess participation interest deduction restriction) and 20a Vpb (loss setoff on change of ownership).

Illustration below describes the tax consequences in respect of Article 10a Vpb. 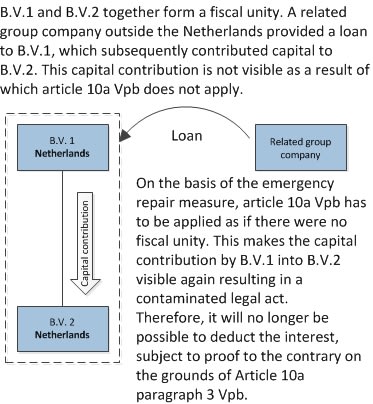 If the CJEU decides to follow the conclusion of the A-G, the measures that have now been announced will be submitted as soon as possible to the Lower House of the Dutch Parliament in the form of a draft bill. The draft bill will ensure that the measures take retrospective effect from 11.00 am on Wednesday 25 October 2017*.  In light of this, it is advisable to check whether the emergency response measures are likely to have a negative effect on existing structures, as in the above example. However, it is also advisable to verify whether the per element approach could for the time being result in more favourable treatment.
* It can be assumed these emergency response measures will also apply to existing fiscal unities and not only to the new fiscal unities created from 25 October 2017 onwards.

We would be pleased to assist you in this matter.