Historically, the incremental development and high costs of renewable energy discouraged the rapid expansion of that industry. But recent shifts in the commercial and technological landscape signal a transformative moment for renewable energy, which now presents a credible challenge to fossil fuels in the competition for global investment.

Solar and wind are the drivers of the renewable energy market, representing 56.0 and 38.0 percent respectively of global renewable investment in 2015. Solar power (photovoltaic and thermal) is the fastest growing renewable energy technology, with 2015 investment increasing by 12.0 percent over the previous year. Wind-related investment grew at a more modest rate, registering 4.0 percent year-on-year growth.

The growing attractiveness of solar and wind to global investors reflects the following factors: 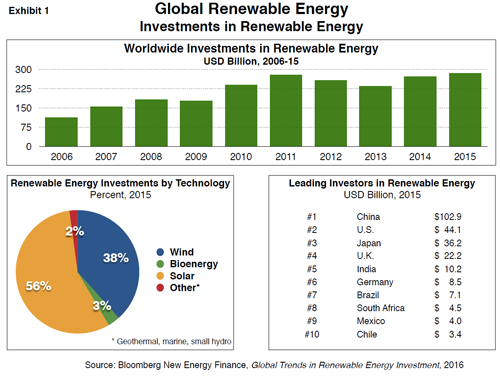 Hydropower represents the largest share (61.3 percent) of renewable energy capacity, well surpassing the portions of wind (21.9 percent), solar (11.5 percent), and bioenergy (5.3 percent). But hydro is also the slowest growing of the renewable energy categories, posting a capacity increase of just 35.5 percent between 2006 and 2015.

Solar constitutes the fastest growing renewable energy sector. Installed solar power grew by over 3000 percent between 2006 and 2015. The surge of solar power results from rapid improvements in solar photovoltaic technology, notably advances in crystalline-silicon PV that have produced a dramatic decline in the cost of solar electricity. According to Dubai-based IRENA (International Renewable Energy Agency), the cost of solar PV electricity has fallen from $0.285/kWh in 2010 to $0.126/kWH in 2015. The pending commercialisation of next generation solar technologies (including the concentrated solar PV system being piloted at Masdar City near Abu Dhabi) promise further reductions in the cost of solar power and continued expansion of solar capacity. 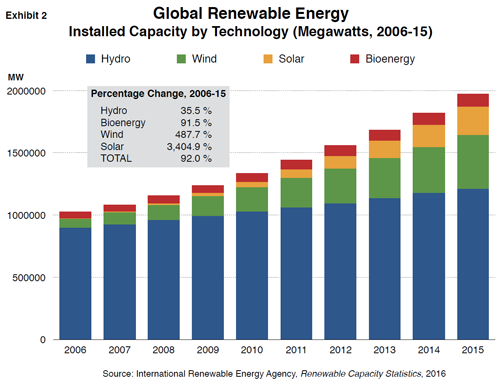 The leading role of the United Arab Emirates in the development and commercialisation of advanced renewable energy technologies illustrates the rising visibility of emerging/developing economies in global renewable energy.

China was the top renewable energy investor in 2015, generating $102.9 billion or 36.0 percent of worldwide investments. That year installed renewable capacity in China reached 520 MW, over double the level of second-ranking U.S. China also enjoys the highest rate of growth of renewable energy capacity (283.5 percent increase in 2006-15 versus 172.0 percent in Germany and 75.9 percent in the U.S.). Measured by technology category, China is the world leader in installed hydro, wind, and solar power and third in bioenergy (see Exhibit 3).

The ascent of emerging/developing economies in the renewable energy sphere reflects the following:

The worldwide growth of renewable energy has coincided with the precipitous decline in hydrocarbon prices. Between June 2014 and January 2016, the price of oil (Brent crude spot) fell by 75 percent while the price of natural gas (U.S. Henry Hub) dropped by 58 percent.

But subsequent shifts in the technological and commercial landscape have altered the calculus of investors:

The dramatic fall in the cost of solar and wind power has made it possible for renewables to compete with fossil fuels, even with declining oil and natural gas prices and the curtailing of governmental support of renewable energy in Europe and North America. 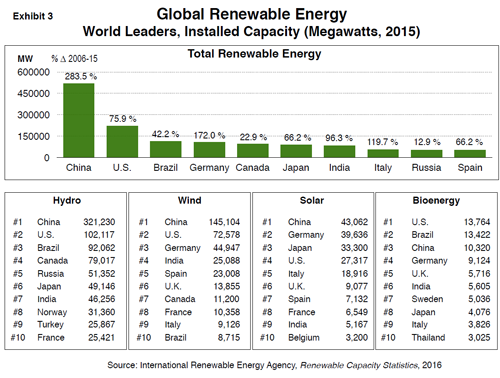 2015 marked an inflection point for renewable energy: For the first time, the share of renewables in new power generation power (53.6 percent) exceeded that of fossil fuel. During the same year, installed renewable energy capacity reached 16.2 percent of the global power capacity, over twice the level obtaining in 2006. This development is unambiguously good news for the renewable energy industry, auguring favourably for fulfillment of the COP 21 international agreement on greenhouse gas reductions.

But these figures underscore the fact that fossil fuels still represent over 80 percent of global power capacity (and nearly 90 percent of actual power generation, whose higher share reflects the intermittency problems that still plague solar and wind power). Notwithstanding the rapid growth of renewable energy, the world economy will remain heavily dependent on hydrocarbons for years to come.