During the past few decades, the rules have been slowly changing in the business world. With computers and the Internet in the pockets of billions of consumers, and with technology constantly improving and becoming more affordable, it no longer takes a big business plan and many millions to start a business. All it takes is a garage, a computer and an internet connection.

In the nineties, the competition was still manageable, but now any start-up entrepreneur could become a competitor worth billions. Being a market leader was once an advantage, but now all your products and services are being undermined one after the other. It's called 'unbundling'. Start-ups aren't interested in the combination of all the things you offer. Start-ups care about that one aspect of the market that they can completely upend to make money.

'The world has developed a new blueprint for starting and running a successful company: technology-driven, agile, self-directed, autonomous teams.'

Fintech start-ups aren't interested in becoming the new full-service banks of the future. They have a huge advantage because they begin with one carefully chosen functionality that they want to take to a new level. Other start-ups, like Uber, which is an app with just a map and a button, will settle for nothing less than shaking up the entire world. Today's consumers would rather use an app instead of having to look up the phone number of the local taxi company in a paper phone book. So much for your market leadership.

And so, the world has developed a new blueprint for starting and running a successful company: technology-driven, agile, self-directed, autonomous teams. And if your start-up doesn't work out, you just stop, without having wasted too much time and money, and move on.

This is a stark contrast to the hierarchical, top-down, yearly budget waterfall approach that tries to succeed at all cost. I call this old-fashioned way of working 'costly failure'. It has no place in the current, rapidly changing world. We've grown up with the phrase "you don't need to reinvent the wheel", but due to technological developments, we can and should reinvent the wheel. 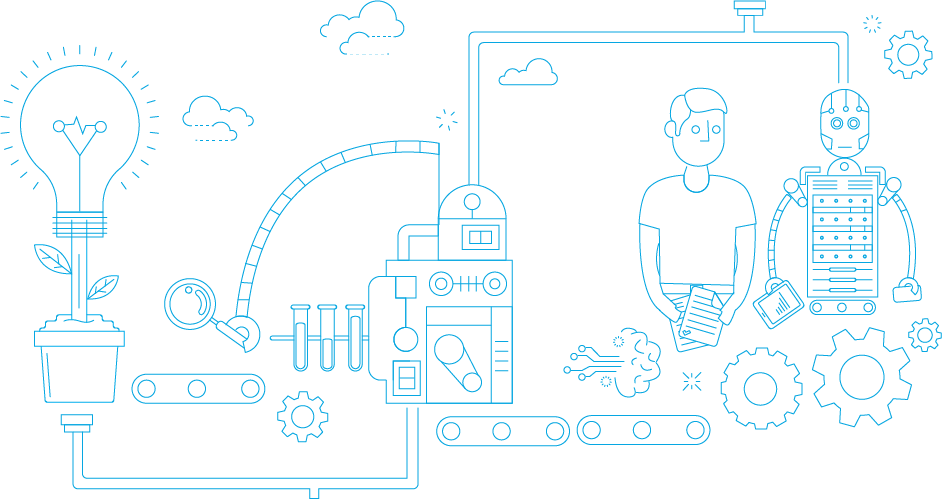 Large, established companies must also embrace this successful start-up way of working in order to still be relevant in the future, but they have an obstacle that I call 'the innovation paradox'. Many people will think “if the company is growing and making a profit, why change?” But, when things do go south – for example, when customers leave, when there are new start-up competitors or when the market dynamics change – there's often no more time and money to reinvent oneself.

'While start-ups are often good at innovating, established organisations are better equipped in terms of their user base, capital or influence. They need each other,'

One common mistake is to think in terms of 'us' vs 'them', as if there are two worlds. Them, the start-up world, and us, the world of established business. This dichotomy may have been valid in the early days of the internet, but now start-ups and established companies are competing over the same consumers, with the same products and services, using the same technology. The distinction is gone. And furthermore, the two aren't enemies, because start-ups and corporates need each other more than ever.

While start-ups are often good at innovating, established organisations are better equipped in terms of their user base, capital or influence. They need each other, and they'll need to work on creating new ecosystems. Most start-ups fail due to a lack of capital and influence, and most big companies will stagnate due to a lack of innovation.

Over the years, I've noticed that many organisations are naturally good at only one of these three aspects. Either the organisation has lots of ideas, or it carries out lots of pilots and experiments, or it immediately implements lots of things. If you try to go from idea to implementation in one go, the consequence will be years of failure and no results. To innovate successfully, all three steps of the innovation model need to be balanced out. By first taking a good look at your own organisation, it will become clear soon enough which aspects of the model you need to invest in.

More and more companies have started investing in ideation, which is essential to successful innovation. In order to get the right ideas from the right people, you need a group of creative people who will commit to those ideas, who can get other people excited over them, who won't prematurely say "that can't be done, that's already been done, there's no budget for that, that's not allowed", etc. People, in other words, who are fully committed to ideation.

It's a good start, but regrettably it's also often the end of the innovation strategy. A common complaint is that a hackathon yielded some great ideas, but nobody actually does anything with them. Ideation is the easiest and most visible way to bring innovation to life, but you can't let it end there.

There are so many ideas, and the world is changing so rapidly, that you can't just pick an idea and spend years working on it and then find out nobody is interested. By experimenting working out ideas in short cycles, in the form of a prototype or something like a visual demo version of an app, you can quickly test ideas with your target demographics. That way, you will find out early on whether your idea is likely to succeed. Don't have board meetings and write memos; go out on the streets, call ten customers on the phone and get them together, contact your intended partners and suppliers, and ask if they want to help to try out the idea.

In order to experiment successfully, you need people who will grasp an idea quickly and well, who will immediately gather up a number of people from the idea's target demographic, and who can make an idea come to life, using graphic designs and quick and simple technical implementations; people who have the mindset, knowledge and network needed to avoid getting bogged down in words and brainstorms and to actually start creating, and to have a result to show within two months, including feedback from the target audience.

The experimental stage is a very important step, because fully implementing every idea right away would take too much time and money. This step is often skipped. Many companies think they already know what their customers think, or have never done this step before, and immediately move on to the implementation of the idea.

Companies are often too overwhelmed with resolving defects in their legacy systems and adapting to new regulations to implement new and innovative ideas at any sort of pace. Separate teams must be put in place that can detach themselves from traditional projects. A team that can realise a prototype within a short timeframe will allow for cost effective R&D that doesn’t distract from the current challenges a business may be facing.

Moreover, if ideas are delivered to senior management all ready to go in the form of working demos or prototypes, the time pressures of their job will also be reduced, and they'll be able to work towards a successful realisation and implementation even faster.

How much budget does it take to innovate? In my experience, the biggest mistake you can make is to set a budget for innovation beforehand. The money always runs out, and the results are always disappointing. A better way to get people to do the things they need to do is to state clearly what you want to achieve with the innovations – for example, 5 years from now you want 5% less expenditure in 5 of your 15 departments, or in 3 years you want 10% more customers and 10% more revenue per customer in 3 out of 7 product categories – and then to discuss with your innovation teams what every step towards achieving that goal is worth to you.

For example, you could add three years' salary to the budget for every FTE the team saves you or agree that for every new customer or for all revenue increase that is achieved, 10% of the revenue will be added to the innovation budget for that year. This way, innovation is not an expense, but an entrepreneurial way to create value for the organisation.

With the right ideas, experimentation and a short-cycled and agile implementation, every established company can be like a start-up. And that way, even if you won't immediately change the course of your bulky oil tanker, you can still gather up a fleet of speedboats. Not because it's fun, but because it's necessary to react quickly to future developments in society – if you won’t, a start-up certainly will.