IFRS 7 has seen amendments and improvements since it was issued more than 10 years ago, yet it is often still poorly applied in the preparation of financial statements. Although IFRS 7 is a fairly concise Standard, its requirements are unlikely to be fully appreciated without also studying the application guidance contained in its Appendix B and, to a lesser extent, the information contained in the Standard’s accompanying Implementation Guidance and Basis for Conclusions.

Some of the more common disclosure deficiencies and errors, specifically related to the maturity analysis in respect of liquidity risk management, are discussed below.

Before the maturity analysis can be prepared, the preparer should ensure that the current / non-current classifications in the Statement of Financial Position (SFP) are in accordance with the provisions of IAS 1. The classification as current or non-current is particularly challenging where the terms have not been agreed on a commercial basis, i.e. loans between related parties either with no stated repayment terms or where repayment is to be agreed between the parties from time to time (1). In these situations, loan liabilities with no stated repayment terms are generally classified as current, because the debtor has no unconditional right to defer payment for at least 12 months after the reporting date. However, a loan receivable might be classified as non-current to reflect the expectation of recovery rather than the entity’s right to call for repayment.

Company B has received a loan from its holding Company A and, in turn, has advanced the funds as a loan to its own subsidiary Company C. The loan agreements for both loans state ‘no fixed terms of repayment’ and there are no other unusual covenants or restrictions in respect of repayment. Companies A and B do not anticipate calling for or realising their respective loan assets within the foreseeable future.

As the loan agreement has no stated terms of repayment, the counterparty (Company A in this situation) could, even if unlikely to do so, call for repayment and the loan should therefore be classified as a current liability by Company B, which does not have an unconditional right to defer payment for at least 12 months after the reporting date. (IAS 1.69(d))

Unless there is an expectation to recover the loan asset within 12 months after the reporting period, it should not be classified as a current asset. The company’s expectation, rather than its right to call for repayment, is relevant when considering loan assets. Company B should therefore classify the loan asset on Company C as noncurrent. (IAS 1.66 (c))

However, IAS 1.65 encourages information about expected dates of realisation of assets and liabilities in assessing the liquidity of an entity, irrespective of whether assets or liabilities are classified as current or non-current. The recognition of the above loan liability as a current liability in the SFP and again under a current time band in the maturity analysis could potentially imply a significant liquidity risk, though the entity might not be expected to settle the liability for many years to come. In the event that the lender reflects a strong commercial financial position, it may have both the ability and intention in support of disclosures (in the borrower’s financial statements) as follows: (8)

“The loan from the [shareholder / group company / related party] does not have fixed terms of repayment. As a consequence, the loan is presented as a current liability as management does not have an unconditional right to defer payment beyond 12 months. The expected maturity of this loan is, however, not expected to be (wholly) within the next 12 months as the lender has both the ability and the stated intention to not call this loan within the next 12 months. Except as noted above, the company expects to pay all financial liabilities on their contractual maturities and expects to meet such cash commitments through cash flows from operating activities and the utilisation of available finance facilities where required.”

IFRS 7 requires a maturity analysis that shows the remaining contractual maturities of its derivative and non-derivative financial liabilities and a description of how it manages the inherent liquidity risk. These analyses often reflect the discounted cash flows of the contractual maturities rather than the undiscounted cash flows, which are required to be disclosed as described in Appendix B (paragraph B11D) as follows:

“The contractual amounts disclosed in the maturity analyses as required by paragraph 39(a) and (b) are the contractual undiscounted cash flows, for example:

(b) prices specified in forward agreements to purchase financial assets for cash;

(d) contractual amounts to be exchanged in a derivative financial instrument (e.g. a currency swap) for which gross cash flows are exchanged; and

Therefore, the maturity analysis should disclose the gross lease payments due before deducting the unearned finance charges. Hence, one might conclude that the maturity analysis is essentially a cash flow forecast and to some extent it is but, as noted above, the analysis should present the contractual maturities which may be different to the expected maturities (as used for cash flow forecast purposes) of financial liabilities. 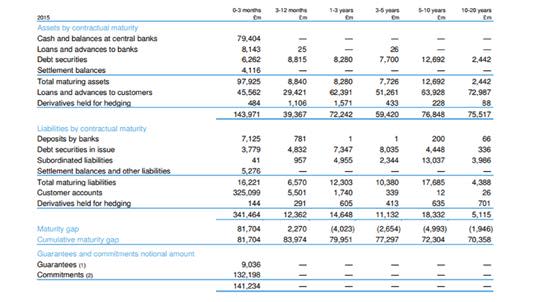 This analysis is not always presented where it is necessary to describe how the entity expects to manage its liquidity risk. In situations where the reporting entity has a significant debtor book, the realisation of which is critical to its liquidity management, then to avoid duplication of disclosures the maturity analysis may make reference to the disclosure of the undiscounted cash flows within the trade receivables note. In this case the wording may be as follows:

Another common deficiency is the time bands used for presenting the maturity analysis. A preparer is to determine an appropriate number of time bands, having regard for the nature of the financial instruments presented; for example:

(a) not later than one month;

In practice, the following time bands are very often used instead:

(a) not later than one year;

(c) later than five years. Time bands used in practice do not always provide information in addition to that which can already be gleaned from the SFP and related notes.

Time bands that are too wide may also dilute the value of the maturity analysis as liquidity risk is often more critical in the short term and can generally be managed more easily over the longer term.

The inclusion of non-financial instruments in the maturity analysis

Although a less frequent occurrence, deferred revenue is sometimes included in the maturity analysis. By definition, deferred revenue does not qualify as a financial liability as it does not give rise to the outflow of cash or another financial asset. Similarly, a prepayment is also not a financial asset. A constructive obligation is not contractual and should therefore be excluded, as well as tax liabilities, as they arise from statute rather than contract.

IAS 17, the existing standard on leases, requires the disclosure of commitments in respect of operating leases such as leases for premises, though not in the maturity analysis as operating leases are excluded from the scope of IAS 39 and IFRS 7. With the implementation of IFRS 16, the new standard on leases, these contractual commitments are to be recognised (other than for executory contracts where neither party has performed in terms of the agreement as yet) and are therefore required to be presented separately in the maturity analysis.

1 Refer to RSM Reporting November 2016 – Issue 28 for a related discussion.

2 Editor’s note: these suggested words are purely illustrative and cannot constitute guidance as such.