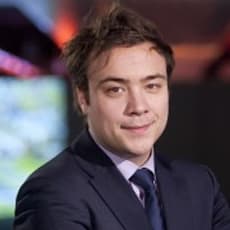 Danny Mekić (Amsterdam, January 12, 1987) is a Dutch entrepreneur, founder and CEO of several companies – of which a hosting provider, technology and innovations consultancy agency, an investment company for young people's startups, a software development company and a recruitent agency –, and is seen as thought leader on innovation, technological developments and legal aspects, such as privacy, as well as entrepreneurship and educational policy in The Netherlands. He writes opinion articles for the major Dutch newspapers but has also been featured in The Financial Times, The Times and The Economist.

In 2002, at the age of 15, Mekić founded his first company – an internet company. Two years later he quit high school to fully focus on his businesses. Nevertheless he was admitted to the University of Amsterdam in 2007, where he started with the honoursbachelor Jurisprudence with elective courses in Psychology and Economy. In 2008 he became chairman of the Student Faculty Board. Mekić is one of the most asked speakers on technology, innovation and entrepreneurship in The Netherlands. He has weekly media appearances in The Netherlands, but has also been featured on radio and television in other countries many times.

Mekic' was awarded as "most successful young entrepreneur of The Netherlands" by Sprout, an entrepreneurial magazine, and was rewarded as well by Quote and Elsevier, two leading magazines in The Netherlands. Also, he has been appointed in an advisory board of the Dutch Ministry of Education, Culture and Science and the Ministry of Economic Affairs, that has to stimulate
entrepreneurship in the educational system.

In 2011 he founded NewTeam, a international consultancy agency that focusses on strategic and innovative boardroom consultancy to large organizations on technology, media and communications, and is specialized in disruptive innovations and new business models. NewTeam works for 40 of the 100 biggest organizations in The Netherlands and several government agencies, but also has customers in seven other countries in Europe, America, Australia and the Middle-East. Danny teaches on several universities and has been invited by all Dutch universities and universities of applied science as a guest lecturer. Also he has been teaching in over 20 other countries

During the past few decades, the rules have been slowly changing in the business world
Read more