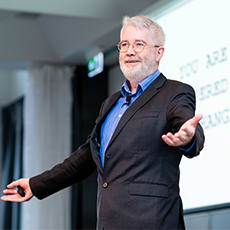 Since 2000, Jason has been a Director of Minds at Work, a commercial collective of autonomous thinkers and problem solvers dedicated to supporting anyone interested in Making Things Better.

Their mission is to Help People Think and their work has involved them (in one form or another) in just about every government department, many not-for-profit organisations and some of the largest corporations on the planet.

While establishing Minds at Work, Jason also worked as a lecturer teaching Innovation, Logic and Problem Solving at Melbourne Business School, in courses of his own design. He was a Guest lecturer in Innovation at the Australian Graduate School of Entrepreneurship and for the Stern Business School of New York.

In 2003 he co-founded (with Larissa Brown) the Future Environmental Leader's project, which quickly blossomed to become the multi award-winning Centre for Sustainability Leadership. Jason is still an active contributor to the project.

In 1994 he became the Creative Director of AAV Australia, the country's largest multimedia production company. He was responsible for the creative output of 200 media professionals on big budget creative projects for large business and government clients.

From 1988 to 1994 Jason worked as an idea merchant and freelance wordsmith for the commercial film and advertising industry, at least by day. At night he developed and taught Creative Writing and Thinking at Holmesglen TAFE.

Between 1984 and 1988 he was a Producer at Australian Business Theatre, one of the most creative and commercially savvy successful media production houses in the country.

From the late 1970’s to the mid-1980's Jason was a stage manager, presenting and touring everything from kid’s pantomime and stage magic to Shakespeare and Grand Opera. He worked with Playbox, MTC, St Martins Theatre, The Pram Factory and the Victoria State Opera.

“If you want sparks you’ll need a little friction. And that means somehow orchestrating minds that have very little in common.” In this article, Jason Clarke discusses how leveraging  diversity of thought can lead to more innovation and success for your business.
Read more

Surfing the waves of change - Part 3

Welcome back to our 3rd video in this series. In the last video, Jason told us that we need to focus on the ‘big and slow’ waves, how we can recognise them, and what they can tell us. In this final video, Jason suggests we should be optimistic about the future and how we can spot the opportunities if we put aside fear. Part 1  &n...
Read more

Surfing the waves of change - Part 2

Welcome back to our 2nd video in this series. In the last video, Jason talked about how sci-fi and tv from our youth has predicted many of the technologies we enjoy today. He also talked about how change can be seen as coming in waves. In this video, Jason will be talking more about these waves, including which to avoid, and which we should pay ...
Read more

Surfing the waves of change

Is the future really as unpredictable as we might believe? Perhaps not, says Minds at Work founder and thought leader, Jason Clarke, in this three-part webinar and article series for Leading through Change. Part 2          Part 3 Today’s cutting edge technology was yesterday’s science fiction; in 1966 the...
Read more

Reinventing your business for a new way forward

When it comes to business, change and transformation is inevitable - how you prepare for and respond to that can often be the difference between success and failure.
Read more