Why have add-on acquisitions been key to Private Equity deal volume remaining resilient?

When diving into the profile of Private Equity (PE) transactions that have occurred since 2018, it’s striking how add-on acquisitions have become such an important part of the market.

These acquisitions, which involve a PE-backed business making acquisitions, have been at their highest in 2022 to Q3, and made up 74% of all UK buyout deal flow by number of transactions. The remaining 26% of deals are what’s known as platform or primary acquisitions, where the PE firm makes an acquisition and there is no pre-existing portfolio company that that business will be integrated into.

Add-on acquisitions have become an important feature of the market 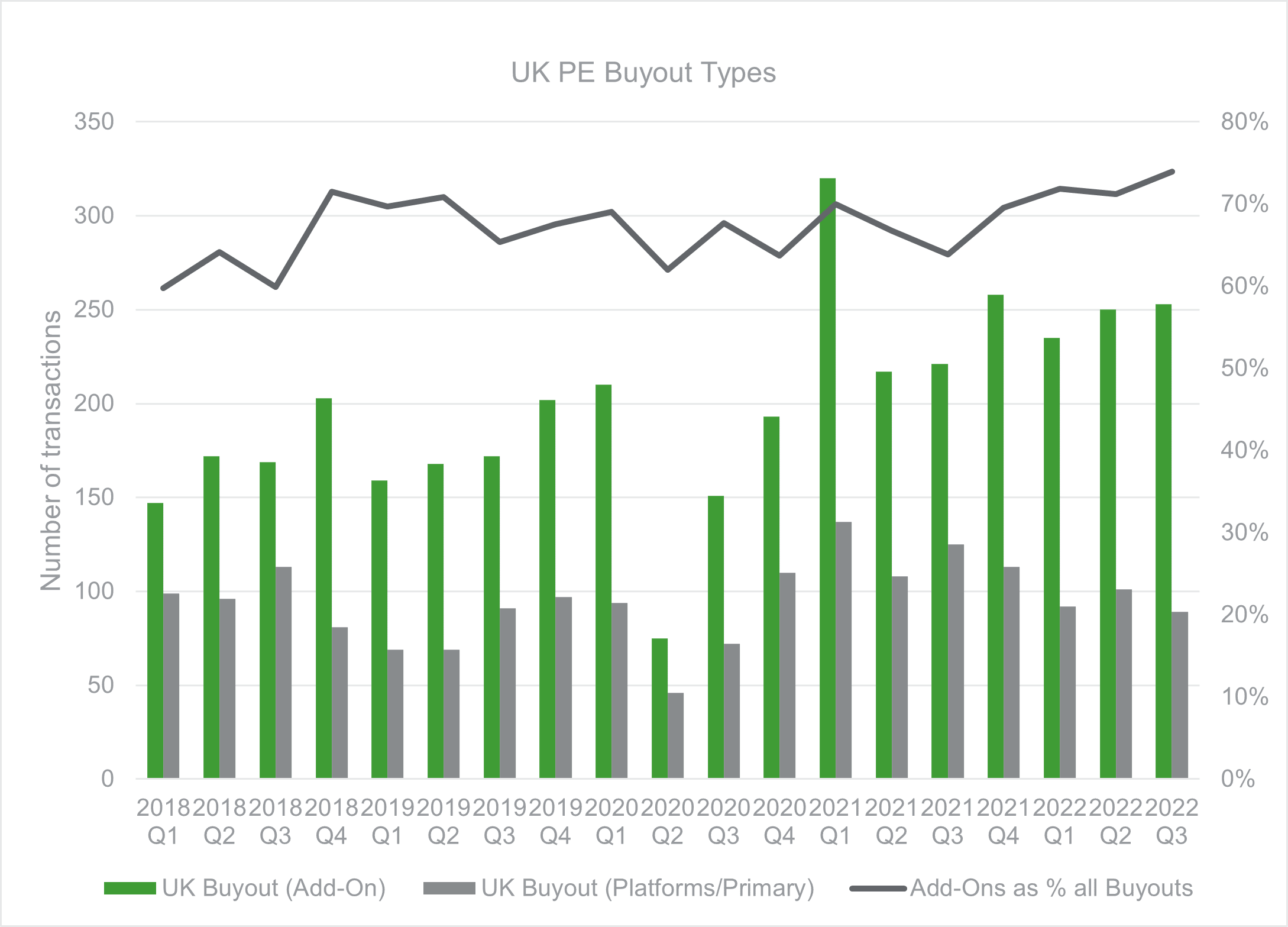 There are multiple reasons for add-on acquisitions, such as:

Multiples arbitrage is particularly attractive when valuations are high, especially for the platform businesses that go on to make the add-on acquisitions. The lower price multiples that smaller companies can command help blend down the average acquisition price of all the companies that now make up the enlarged company. This is evidenced in the chart below where the rise in add-ons relative to platforms/primary deals coincides with a rise in the median post deal valuation of platform/primary deals undertaken. 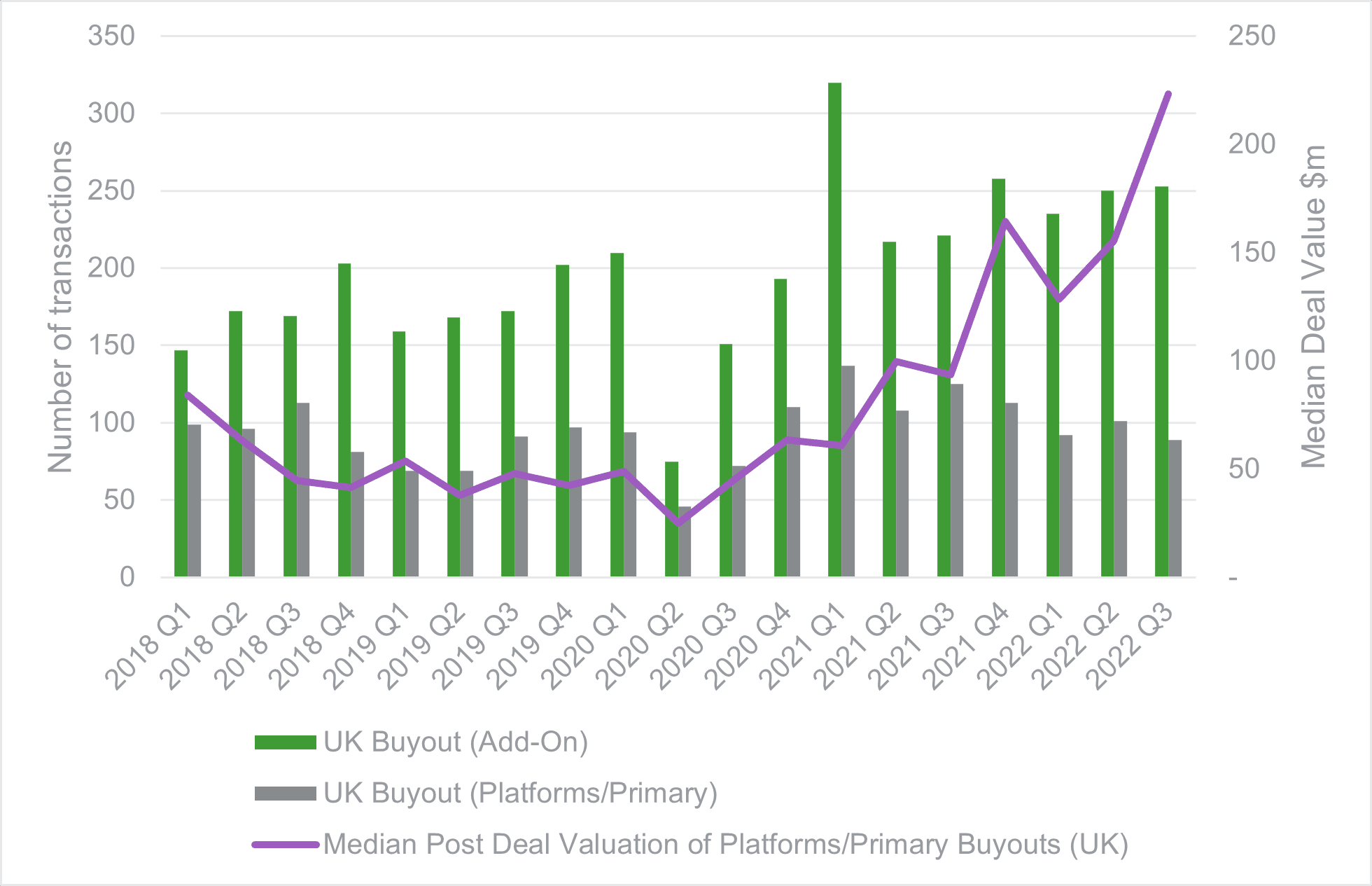 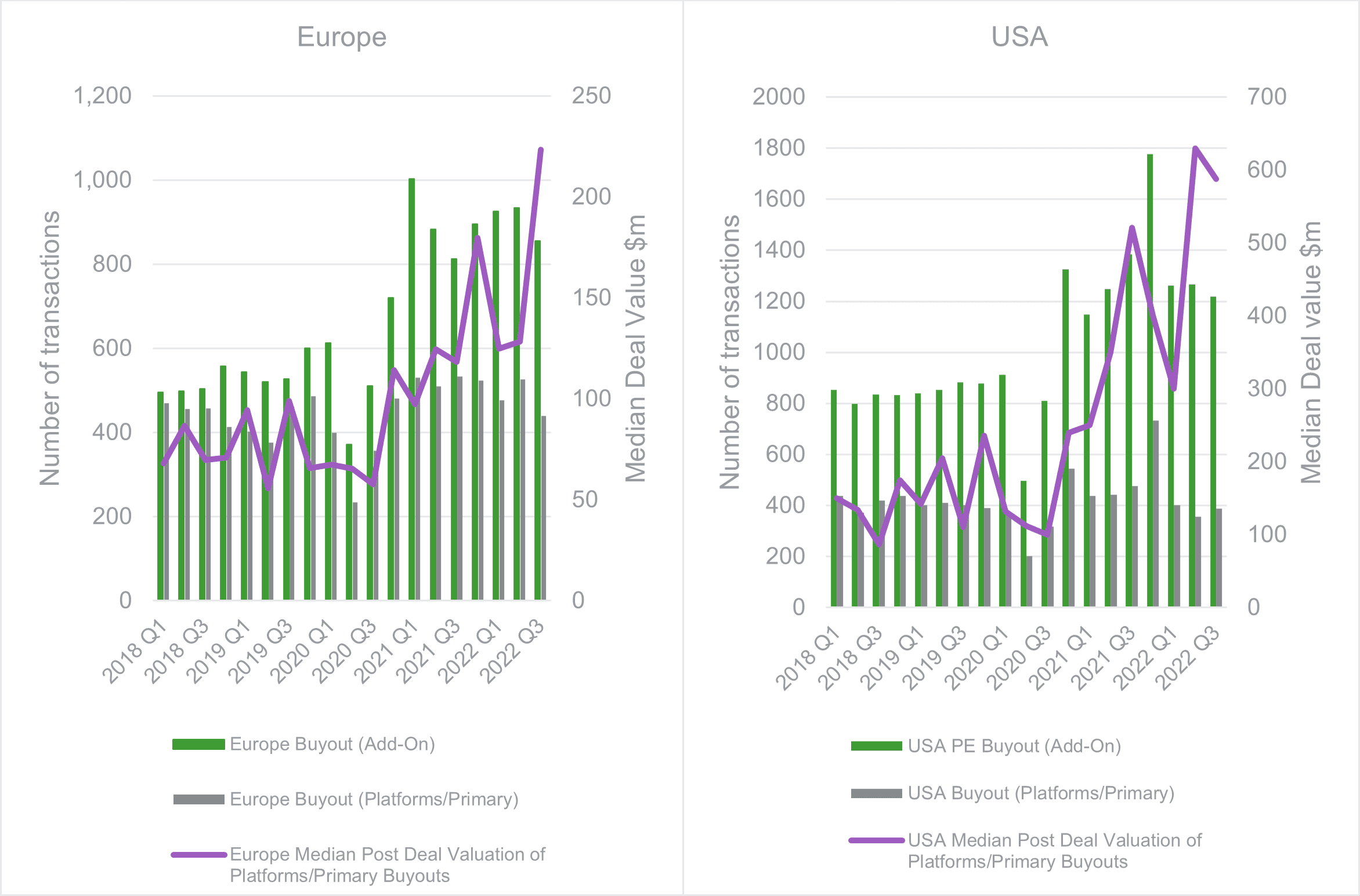 We do, however, expect median valuations to decline as company performance is impacted by the current economic climate.

As would be expected, there’s a general rise in fund raising by PE funds and their investmetnt activity in both Europe and the US, i.e. the more money that’s raised, the more deals that occur. A notable difference however occurs from the later part of 2022 where Europe starts seeing a decline in funds being raised starting in 2021. But that period coincided with a marked increase in the number of transactions, especially in add-ons. That explains the 23% drop in dry powder located in Europe from the peak of $350bn in 2020 to $271bn in June 2022, and only 13% in the US from $845bn to $749bn for the same period.

In the US after the first wave of the pandemic in 2020 Q2 there was a rise in add-on deal volumes and a parallel increase in fund raising indicating that those funds were being used for add-on activities (and the increasingly expensive platform acquisitions as laid out above).

Europe’s fund raising has slowed while the number of transactions has remained high. The US fund raising and add-on deal volumes have stayed high 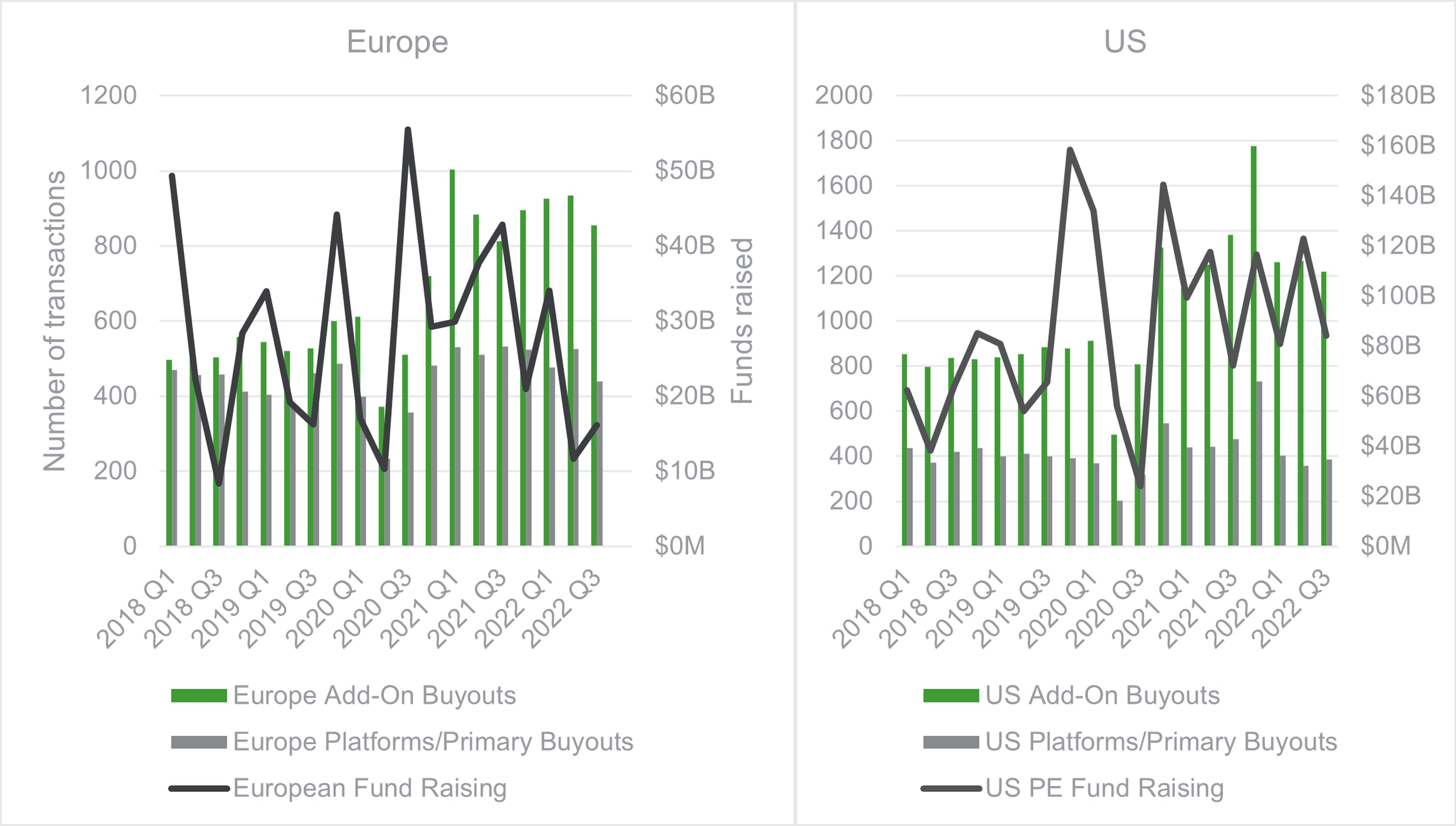 However, add-ons must be integrated…

Value creation through using multiples arbitrage alone is unlikely to be successful, as potential buyers might, on closer inspection, value the entities separately. It’s therefore imperative that PE firms, their portfolio operations teams, and the management teams of the portfolio companies involved, actively pursue the strategic, commercial and operational benefits of the combination.

The necessity for effective integration is even more pronounced when pressured economies and a diminished dry powder pool, albeit from close to the peak, start shrinking the pool of interested investors in a business, which would otherwise have been key to pushing up prices as investors compete for the asset.

…and the opportunity cost considered

A highly active acquisition strategy can have the consequence of diverting company resources away from internal projects that would otherwise drive up productivity e.g. training, machinery, equipment, software, and R&D. This is particularly important when considering the long-term productivity of UK businesses and related prosperity. In 2021 for example, the UK was 20% less productive than the US and also behind that of France and Germany when measured on GDP per hour worked.

Add-on acquisitions have been, and will continue to be, a key type of acquisition made within the private equity arena as PE dry powder looks to deploy its near all time high levels of dry powder in both Europe and US.

PE firms are paying higher valuations for businesses they that will go on a consolidation journey with so business owners should think about companies they could acquire to attract PE investment. These could include competitors, or companies in upstream, downstream and/or adjacent markets.

Alternatively, business owners that seek an exit path for themselves should consider selling their business to a PE-backed firm. The business will be actively integrated with the acquiror making a strong combined entity that can better embrace opportunities and weather storms. 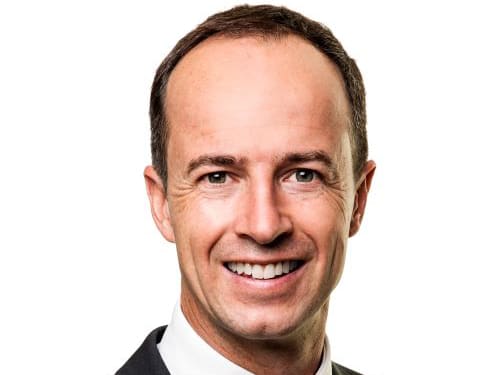 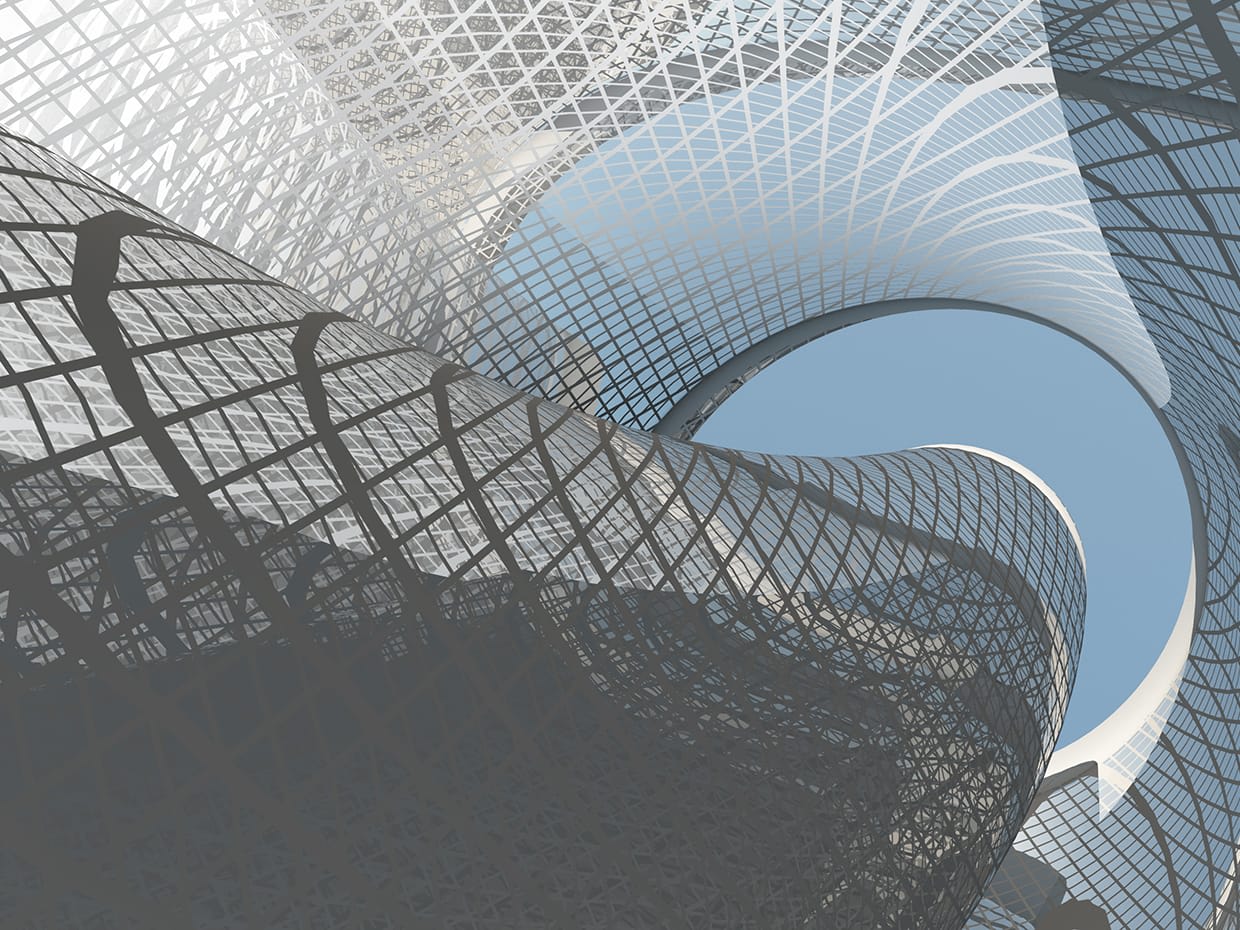 Why have add-on acquisitions been key to Private Equity deal volume remaining resilient? 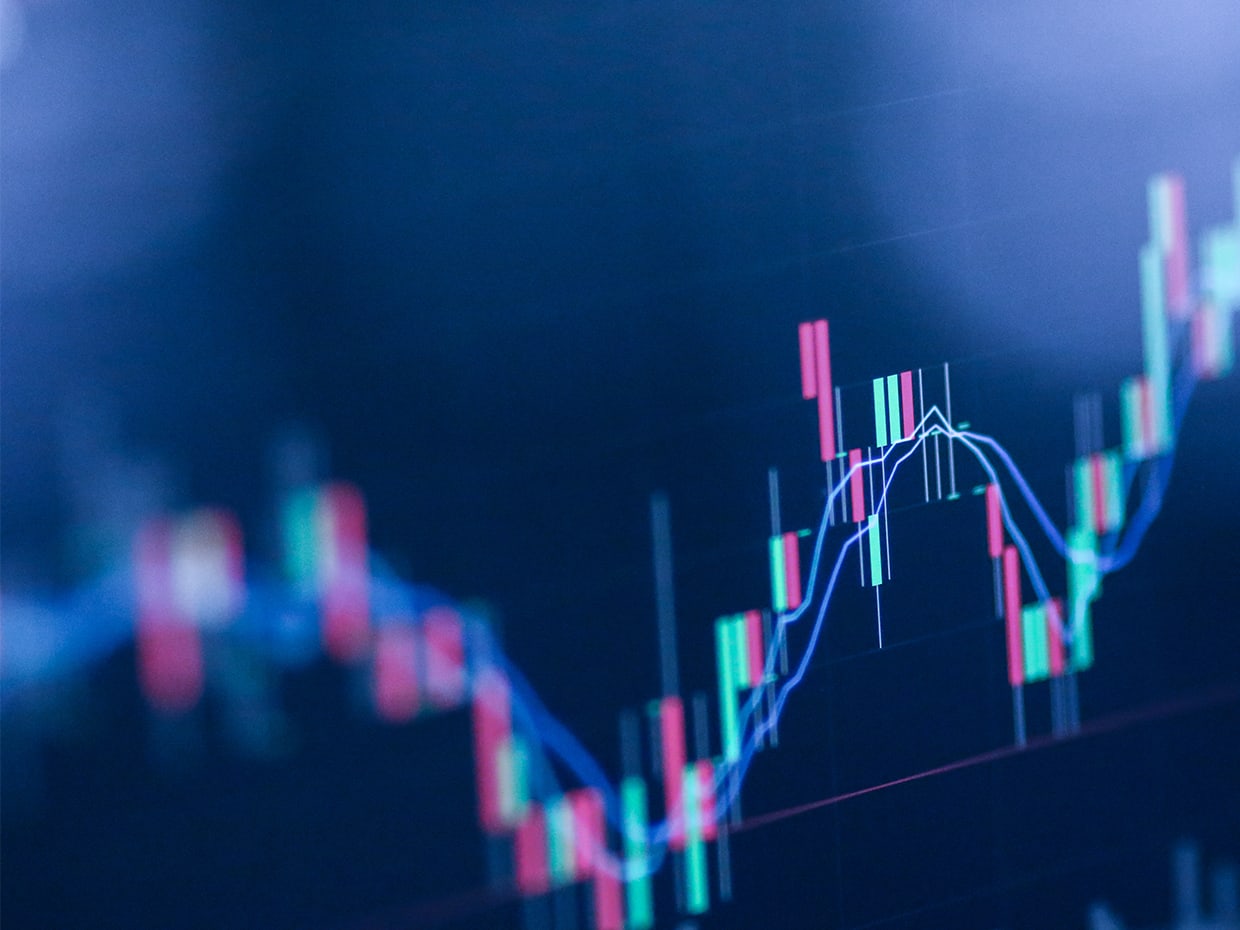 Read more >
Global M&A remains buoyant but what’s next for 2022? 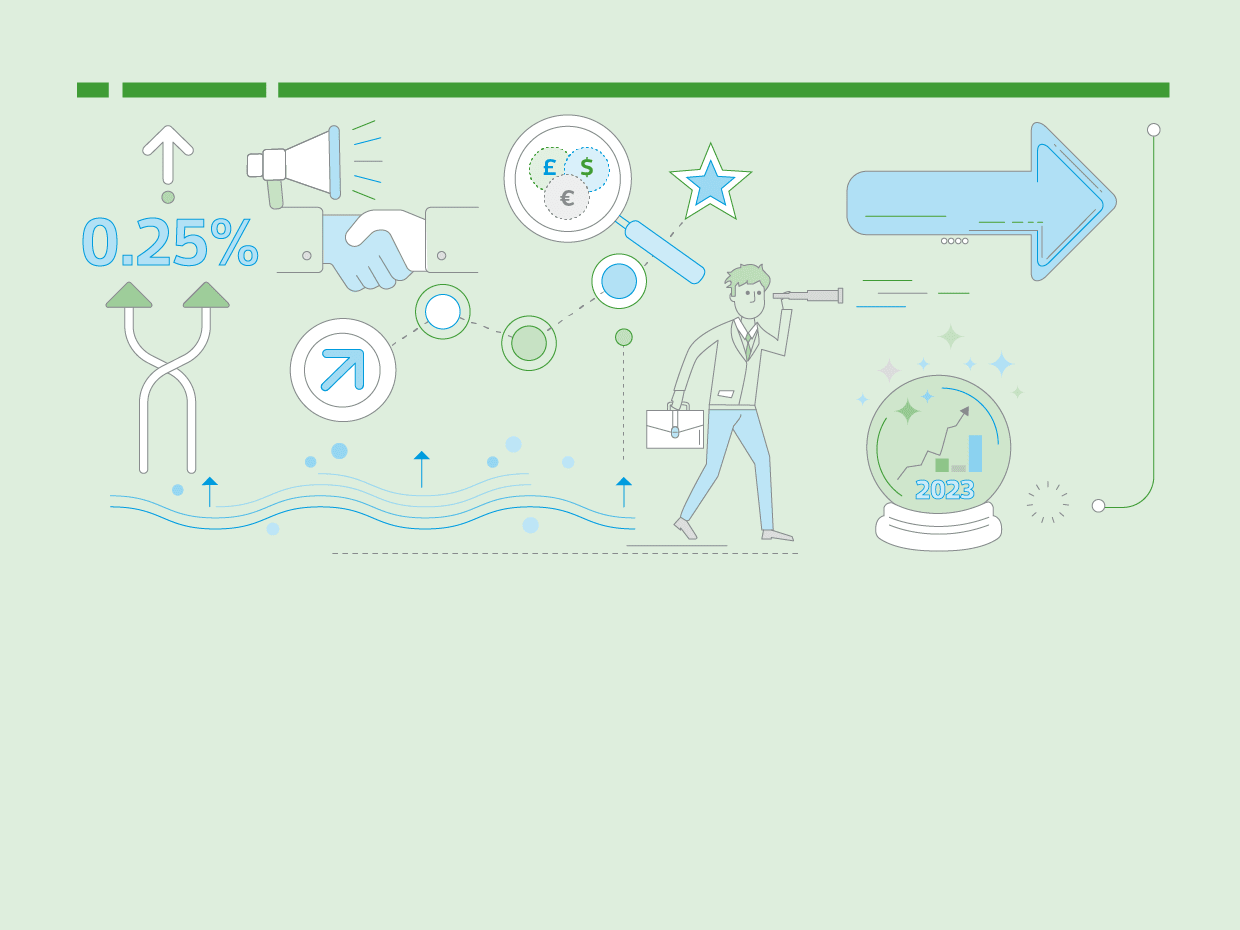