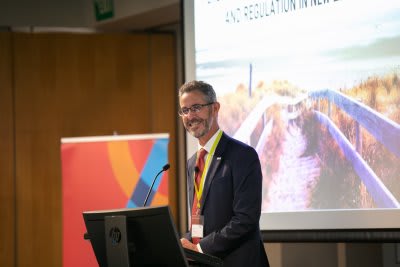 The first ever New Zealand Charity Law, Accounting and Regulation focused conference was recently held at Te Papa in Wellington. It was a resounding success, and RSM is proud to have played our part.

A first ever conference of its kind was held in New Zealand at the end of April with more than 200 attending the event at Te Papa over two days.  The cross-disciplinary event was called “Perspectives on Charity Law, Accounting and Regulation in New Zealand”.  It brought together people from different sectors that are all involved with charity in New Zealand – including lawyers, accountants, charities, regulators, academics, judiciary, social enterprises, impact investors and more.

The aim of the conference was to encourage conversations and sharing of different perspectives so as to get people out of their silos and appreciating a broader and more holistic view of the sector, and its future challenges.

The Charity Law Association of Australian and New Zealand (CLAANZ), the Chartered Accountants of Australia and New Zealand, and Charities Services at the Department of Internal Affairs (the New Zealand charities regulator) combined to be primary organisers and supporters of the event.

RSM, represented by Craig Fisher and Wayne Tukiri, were also heavily involved in the design, promotion and delivery of the event.  As practitioners deeply invested in the charitable sector, we were delighted to be part of the organising committee for this ambitious event, helping to design the programme and source the presenters. At the event itself, Craig Fisher played the critical role of being the Master of Ceremonies, and Wayne Tukiri acted as moderator for one of the discussion panels. RSM also sponsored the catering for Day One as given the topic considerable efforts were made to make this affordable for the sector.

With 12 sessions and 40 speakers (including international speakers from Ireland, Canada, Australia and England) there were many different points of view provided through individual presentations and panel discussions.  There were lots of thought provoking discussions started and perspectives shared as each session featured time for questions and answers and interaction with the audience.

One highlight was the presentation by the Honourable Peeni Henare, Minister for the Community and Voluntary Sector.  Minister Henare provided the keynote address and gave an update on the Government’s recently announced review of the Charities Act 2005 as well as the focus for the Government in this area and his views on the role of volunteers, charities and social enterprises.

Some of the topics included: “Are there too many charities in New Zealand?”, “Charity law and accounting in Te Ao Maori”, “How to build public trust and confidence in the charitable sector”, “Perspectives on social housing and charity”, “The interplay of judge-made and statute law”, “Tax issues and charity”, “Overview of new financial reporting standards implementation”, “Funding, Social Enterprise and the intersection with charities who operate business” and “Who we are as a sector, why are we here and what do we hope to achieve?”.

The intention of the conference was to foster a broader understanding of issues within the sector, increased collaboration and sharing of perspectives.  It was also run as a bare minimum cost covering approach so as to be as inclusive for the sector as possible.

Further to this sector inclusion and benefit approach, the materials from the sessions (videos, academic papers, PowerPoints) have all been made available at no charge on the CLAANZ website here:  http://www.claanz.org.au/events-nzconf2018

Feedback from participants has been very positive with many noting how useful it was to get such a wide range of views and perspectives from across different disciplines and the sector as a whole.   With the proven success of the conference it is now hoped that this conference may become a more regular event.   This is likely to be very valuable given the Government’s recently announced review of the Charities Act 2005 and the implications of this on the sector and the wider New Zealand society.

Some observations and insights to come out of the conference included:

“Just because you are doing good work, doesn’t make it charitable”.

“Charities run the risk of being treated like elderly relatives – we love them dearly, but we don’t always take them seriously”.

“There is no magic “right” number of charities – but there are fiscal consequences”.

“On a per capita basis New Zealand has over twice the number of charities per head compared to Australia, and over three times the number compared to the United Kingdom.   We are great at setting up small entities.  But is this the most efficient and effective use of charitable resources?”

“Unlike for-profit businesses, charities often tend to be driven more by the heart than by the head.  This passion can allow them to achieve more but can also blind them to some practical implications”.

“Social Enterprise – combining the heart of charity with the head of business”.

“To codify or not to codify? – That is the question.   But also, be careful what you wish for regarding statutory definitions!”

RSM are delighted to have helped facilitate this unique opportunity to connect people and explore ideas from across the charitable sector spectrum.

We are happy to share our experience further with any of our own charitable clients and contacts next time we see you and would encourage you to consider getting involved in any future events.

The charitable sector is too important to us all, who are lucky enough to live in a country that values looking after our people, our environment and our freedoms, to not have the discussions about the big issues.