Home / Newsroom / Incorporated Societies Bill - Timeline? And do we have to act now?
Share Print 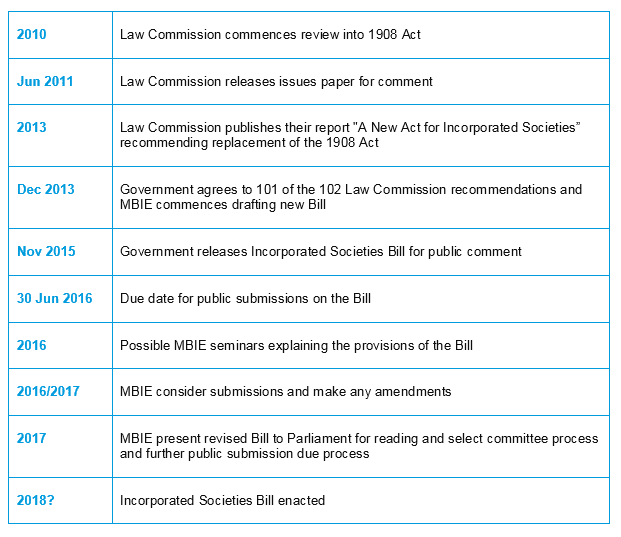 What societies have to do and when?

Looking at the timeline above one can see that it may well be the year 2022 or even later before the new Act is in place and full in effect.   Add 6 or more years to your current age and think about that.  It sounds like a long time.

However we do not suggest inaction.  Similar to other commentators on the Bill we foresee limited changes to the proposals to the likely new Act.  This is because in our view they represent well thought through and sensible change to improve the governance and operation of societies, and they are not politically controversial.   Hence there is nothing to stop societies commencing action now.

We are also well aware from assisting various societies that effecting change can involve significant time.  This is usually due to the need to comply with existing constitutional due process obligations to give notice of meetings, the requirement for special meetings, voting provisions etc.

Any review of a fundamental document such as a constitution can also lead to fundamental strategic considerations which in any membership organisation always take time.

Such fundamental considerations can include:

The process of overhauling the Incorporated Societies Act 1908 will take some time.  However we suggest action needs to be taken now.   Your future starts now.