Home / Newsroom / Incorporated Societies Bill - Timeline? And do we have to act now?
Share Print

Just over a year ago we wrote an article on the progress and timeline of the proposed overhaul of incorporated societies legislation in New Zealand.

So where is this at now and what do incorporated societies need to do?

The timeframe for any legislation overhaul process is obviously subject to change due to the nature of our parliamentary process and the constant juggle the Government and respective Ministries need to make regarding priorities.  However, with that knowledge the following is the current updated and expected timeline: 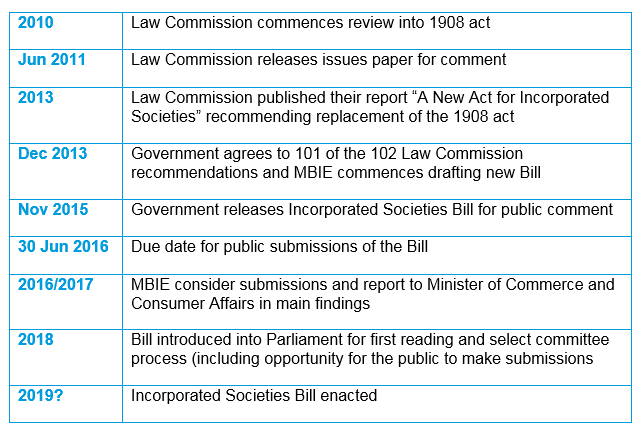 What was the general flavour of the submissions?

As one would expect with any public consultation process a wide range of feedback was received.  However, we understand that the majority of the submissions were in favour of the overall reform.  This is not too surprising when one considers the overhaul is of a 1908 Act which is really rather unspecific and out of date, and especially when one considers some of the large complex national organisations using the incorporated society structure.

We would suggest the general positive support is also a function of the comprehensive consultation and excellent work that the Law Commission did on their original review.

Obviously, there has been some good detail suggestions provided to MBIE as to areas that may need further consideration and these are no doubt being worked through.

As with feedback our firm has received directly from clients and contacts there has been a minority not in favour.  From these concerns expressed directly to RSM our assessment of these is that most are fundamentally concerned with the challenges of change as well as perhaps the fear of the unknown.   This is a perfectly understandable and very human reaction to any change.

The negative minority is also much more prevalent, the smaller the incorporated organisation size.  This is also understandable as the relative impact of any change and compliance cost impost often falls more heavily on the very small and resource constrained entities.

However, we are reasonably confident that these fears are perhaps unfounded for a number of reasons:

As pragmatic types, we appreciate that with any change there will be some pain as individuals affected and the sector as a whole comes to grips with what is required.  However, we also suspect this is likely to be one-off in nature.  We have also heard some fears that appear to be quite unfounded when compared with the proposed changes in the bill that was exposed.

We are also confident that with improved clarity regarding what is required to run an incorporated society should be of long term assistance to those involved in this organisation type.

What societies have to do and when?

Looking at the timeline above one can see that it may well be the year 2023 or even later before the new Act is in full in effect.   Add 6 or more years to your current age and think about that.  It sounds like a long time.

However, we do not suggest inaction.  Similar to other commentators on the Bill we foresee limited significant changes to the proposals to the likely new Act.  This is because in our view they represent well thought through and sensible change to improve the governance and operation of societies, and they are not politically controversial.   Hence if an incorporated society is already planning to update or improve their constitution there is probably nothing to stop commencing action now.  i.e. we wouldn’t delay making improvements merely because new legislation is coming.   We recommend a good reading of the bill should be a useful part of any amendment process.

We are also well aware from assisting various societies that effecting change can involve significant time.  This is usually due to the need to comply with existing constitutional due process obligations to give notice of meetings, the requirement for special meetings, voting provisions etc.

Any review of a fundamental document such as a constitution can also lead to fundamental strategic considerations which in any membership organisation always take time.

Such fundamental considerations can include:

The process of overhauling the Incorporated Societies Act 1908 will take some time.  However, good things always do.