The Budget clearly signals that the earlier proposals to progressively reduce the company tax rate for all companies to 25% has been fully abandoned.

The Coalition has long campaigned on the need to reduce the corporate tax rate from an increasingly uncompetitive rate of 30% to 25% over time, especially against the backdrop of the Trump-led tax reforms in the US, which has seen the federal tax rate reduced to 21% for all corporates.

However the proposed laws to give effect to the reduction in tax for all corporates failed to pass the Senate during this term of government.

With this Budget, the proposal to reduce the corporate tax rate for larger businesses to 25% progressively over the period to 2026-27 has been dropped permanently from the Coalition’s plans.

In essence, the Budget confirms a complex future of different corporate tax rates for companies with turnovers under or over $50 million. Under the new plan to bring forward the reduced 25% tax rate to 2021-22 for small to medium sized companies with a turnover of less than $50 million, there will be a 5% tax rate differential for different sized businesses commencing in just over a year’s time.

Integrity measures and funding for the ATO

The Government claims to have implemented more than a dozen measures to strengthen the integrity of Australia’s international tax framework. These measures include implementing the Multinational Anti-Avoidance Law (MAAL), the Diverted Profits Tax, the G20/OECD Base Erosion and Profit Shifting (BEPS) recommendations, increased tax penalties for large entities, and establishing a Tax Avoidance Taskforce within the ATO.

Since July 2016, the Government claims to have raised $12.9 billion in additional tax liabilities from large public groups and multinationals. The ATO estimates the MAAL alone will bring an additional $7 billion of sales revenue back into the Australian tax base each year.

The Budget provides additional funding to extend the ATO Tax Avoidance Taskforce to 2023, which will continue to have a focus on multinationals, big business and high net worth individuals.

The Budget also signals a focus on increasing the ATO’s engagement and on time payment of tax and superannuation liabilities by large corporate entities and high net worth individuals, with additional funding to enable it to recover unpaid tax and superannuation liabilities. With the potential political sensitivity around the ATO’s debt recovery tactics with small business, the Government specifically states that the measure will not extend to small businesses.

In terms of the measures still being implemented, the Budget reaffirms its commitment to the following specific measures:

After a period of review and consultation, the Government announced proposed changes to the tax treatment of stapled security structures in March 2018 to improve the integrity of the provisions by limiting concessions available to foreign investors. The proposed changes are currently before the Senate.

Proposed reforms to the PRRT were announced in February 2019 and are currently before the House of Representatives.

The proposed reforms were intended to reduce uplift rates on carried forward expenditure designed to reduce future PRRT deductions on long-term projects. Onshore projects were also to be removed to simplify the PRRT regime, after proving not to generate any revenue. Both amendments were proposed to be prospective, applying from 1 July 2019.

With the final Parliament sitting days coming up, the stapled security and PRRT reforms may not have much chance of being enacted before Parliament dissolves for the election.

Proposed changes to bring offshore sellers of local hotel accommodation into the GST net are also contained in a bill before the House of Representatives that looks unlikely to be enacted before the election.

The Government will make a number of minor amendments to Australia’s hybrid mismatch rules to “clarify their operation”.

The hybrid mismatch rules are designed to prevent multinational corporations from exploiting differences in the tax treatment of an entity or instrument under the laws of two or more tax jurisdictions.

The proposed changes will stipulate how the rules apply to Multiple Entry Consolidated (MEC) groups and trusts, clarify the meaning of foreign tax, and specify that the integrity rule can apply where other provisions in the tax law have applied.

It is not expected that the proposed changes to the hybrid mismatch rules will raise any additional revenue over the forward estimates.

The Budget allocates an additional $1 billion over four years from 2019-20, to the ATO to extend the operation of the Tax Avoidance Taskforce.

This measure is estimated to produce a gain to the budget of $3.6 billion over the forward estimates, suggesting that the ATO considers that there is still significant upside from compliance programs aimed at large businesses, multinationals and high net worth individuals.

If you haven’t already battened-down the hatches with strong tax governance processes – now might be the time. 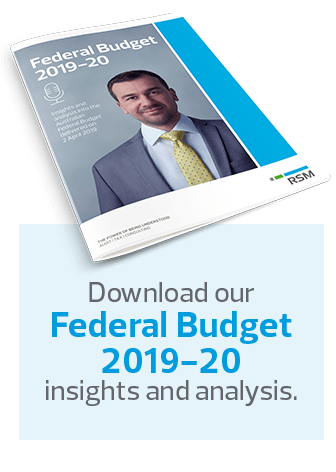