Australia takes the next step to taxing the digital economy

The Australian Treasury released a discussion paper in early October 2018 to inform a consultation about whether, and if so, how Australia could introduce an ‘interim measure’ to tax sectors of the digital economy.

This initiative was first announced in the Treasurer’s 2018-2019 Federal Budget speech. No design details are included in the paper and further, it can be read to suggest no decision has yet been made to implement such a measure. But the consultation will prepare Australia for a more informed decision, should international developments dictate.

The Treasurer (now Prime Minister) Scott Morrison noted in his 8 May 2018 Budget speech that Australia has been actively participating with the OECD and G20 to “bring the digital economy into the global tax net”. He

foreshadowed the issue of a discussion paper (the Australian paper) “in a few weeks”, with it finally emerging on 2 October 2018. The paper supports a near two-month consultation period during which Treasury will “… explore options for taxing digital businesses in Australia.”

Drawing on the OECD Action 1 Interim Report 2018, and also a proposal from the European Union and a Position Paper from the UK Government, the Australian paper notes:

With the Base Erosion and Profit Sharing (BEPS) Project Action Reports now being implemented around the world, it can be said the fixes are ‘in’ to stop double non-taxation. The 2015 actions can be seen as a battle between governments and business, and there was only ever going to be one winner in that conflict.

But this BEPS Phase 2 is much more complicated. This is a battle between governments for a re-division of the international corporate tax ‘pie’, with source countries strongly arguing for a much greater share, at the expense of traditional advanced economies, where most of these large digital businesses are resident.

The competing arguments around nexus and profit attribution can be summarised as:

The ‘market’ has traditionally never been a basis for taxing rights, or nexus, but this fundamental of international tax law is now under heavy attack. The outcome is not clear, but the weight of numbers is with the ‘market’ (source) jurisdictions. 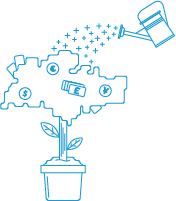 The G20 has tasked the OECD to reach a global consensus on this issue by 2020. But the positions and actions of a number of states reflected as a stark warning in the Australian paper, suggest consensus may not be forthcoming and certainly not by 2020.

It is against this gloomy background that Australia is considering some form of an excise tax on certain types of digital businesses. Digital advertising, particularly by non-resident digital operators is top of the list, presumably implemented by a withholding style regime imposed on Australian customers.

Also likely to be targeted are digital platform operators which engage Australians on one side or other of the platform.

It may be that the Australian Government is following the UK path – laying the foundation for a special digital tax regime, but not yet moving to implement it. Or it may be that by the time the consultation process is complete, and the government has the chance to consider the recommendations, we will be well into 2019. With a federal election required before June 2019, the legislation could be in place for a 1 July 2019 start date.

But this is mere speculation at present – the consultation process must first run its course.

RSM will be working on a submission to the consultation, and if any clients wish to contribute, please contact your RSM tax contact.