Home / Do you have the evidence ready for a JobKeeper claim review by the ATO?
Share Print

Do you have the evidence ready for a JobKeeper claim review by the ATO?

The first of June is traditionally the start of winter but, for the tax-minded amongst us, 1 June 2020 also marks the official start of the next phase of the JobKeeper scheme.

The expectation is that most businesses in the JobKeeper scheme have by now performed their GST turnover analysis, collected their employee nomination forms, registered with the Australian Taxation Office (ATO) and are eagerly awaiting their JobKeeper payments for May and, in many cases, for April also.

Much like winter, there is a segment of the taxpaying community that is ready for this next phase of the JobKeeper scheme, but many are wholly unprepared for what the new season will bring.

If recent media reports are anything to go by, the ATO is ramping up its compliance activities to ensure that those businesses who have made a claim for JobKeeper purposes have correctly satisfied and documented their eligibility requirements, such as calculating their required decline in turnover.

In terms of being ready for an ATO review, in theory, it is quite simple...

The JobKeeper rules are very clear that every business that makes a JobKeeper claim must have:

It follows that a business that does not have detailed support and analysis in writing, usually in the form of a reasonable position paper, should be worried about an ATO review of its JobKeeper claim.

To perhaps bust a few myths, simply providing the ATO with GST reports, general ledgers, and profit and loss statements from your accounting system and a “gut feel” from management around expected turnover in the coming months would almost certainly not constitute sufficient documentation. For businesses which are applying an alternative test, including service entities, and businesses which are subject to special rules such as charities, a bare minimum would be a written paper outlining how it has satisfied each element of the alternative test and how it has satisfied any special rules (e.g. has a charity included gifts, and excluded government grants, in its turnover calculations).

Our experience is that many businesses registered for the JobKeeper scheme on the basis of “worst-case” projections and forecasted scenarios around their customers, suppliers, or in some cases, entire industries being shut down or heavily affected by COVID-19. These projections were being undertaken in April and early May, when the pandemic was as its economic worst and there was no obvious pathway to future growth.

As projections are now giving way to reality, many businesses are finding that their supply chains, customers, and industries have been surprisingly resilient and they are now not experiencing, and not projecting, the level of decline they were when they were undertaking their JobKeeper projections.

While it is no doubt good news that businesses are recovering quicker than expected, should those businesses who made JobKeeper claims on the basis of suffering 30%, 40% or 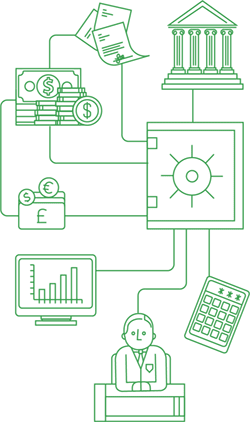 sometimes higher than 50% declines in turnover, but who may actually only suffer declines of, say, 20% be worried? Those businesses with robust and thorough documentation to evidence that their projections, when made, were reasonable should be protected even if their actual decline in turnover is less than expected, but those businesses without detailed documentation should be mindful of their record-keeping obligations and should seriously consider putting in place a position paper before the ATO starts to ask any questions.

Technically, the ATO cannot judge the merits of a JobKeeper claim, or the originally forecasted decline in turnover, with the benefit of hindsight. But that does not mean the ATO cannot attack a forecast as being unreasonable when it was first made and look to have any JobKeeper payments repaid, together with penalties and interest.

It goes without saying that JobKeeper payments are not “free money” and there is an obligation on all businesses to have taken reasonable steps to document their claims.

The good news is that it is not too late to document, or re-visit, the reasonableness of JobKeeper eligibility calculations. Doing so now, and in anticipation of an ATO review, will provide a business with an additional safety blanket that its JobKeeper claims are able to stack up under scrutiny by the ATO. However, taking the approach of not having sufficient documentation in place may leave business out in the cold when the ATO comes knocking this winter.

For more information on your documentation requirements for JobKeeper claims, please contact your local RSM advisor.