As a celebration of the positive contribution men make to our communities, today we share the stories of men at RSM and the organisations they are involved in, the people who have shaped them, the challenges they face, and the roles they have to play in shaping the future.

Q. What led you to get involved in the Riverina Anglican College?

A. I got involved with The Riverina Anglican College when the college was just commencing. The Bishop asked me to be on the board for an initial two-year period. That was nearly 19 years ago. I have been on the board continuously for nearly 19 years and the Chair for the last 11 years. I am retiring from the board at the end of 2018.

I got involved for the following reasons: 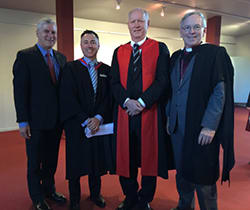 1. My faith. I am a practising Anglican.

2. To have a secondary college that when we had children they could attend. My eldest child is in year 9 currently.

3. To assist in Wagga's economic development as the college is in the top 100 secondary schools in Australia for academic results (The Australian newspaper leading schools ranking) and the only regional secondary school that offers the international baccalaureate diploma programme.

A. I have been very lucky that many people have been around to assist me. Some people who have taken the time to mentor me are Jack Beetson (leading Aboriginal Leader and one of the pioneers of land rights in NSW) and Chris Conybeare AM (ex-secretary to the Prime Minister and cabinet, ex-secretary of the Department of Immigration and Ethnic Affairs).

A. For someone who is at my stage of life: 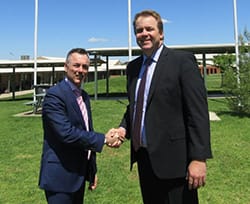 For someone who is single:

Knowing who you are, treating everyone with respect and being confident in yourself.

A. Men have a very important role in conversations about gender parity. We have to talk the talk but most importantly walk the walk. For example, on every board I have been on I have encouraged gender diversity. Why exclude and not have representatives from 50% of the population?

I have found that a diverse board functions better and has greater and more diverse ideas.

Q. What led you to get involved in the Perth Highland Pipe band?

A. Just followed on from learning drums at school. It seemed silly to work so hard at learning an instrument to just throw all that away after school finished. I joined the pipe band and 34 years later, I’m still going! It’s a good hobby (and something a little unique) that has 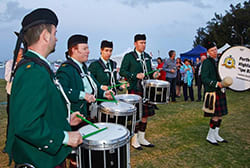 taken me all around WA, Australia, and overseas!

A. A little cliché, but my father – always supportive of good ideas and worthwhile activities, but happy to talk about ideas that perhaps weren’t so good. He had pretty clear lines of what was right and what was wrong – and I certainly have inherited that trait!

A. The major issue isn’t a new one. Men would rather silently work their way through their problems, rather than talk about them. 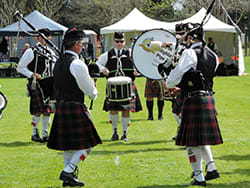 A. I have a problem with people who believe that stay-at-home-dads are slackers when nothing could be further from the truth. For some reason, it’s still assumed by many that the husband is the one who should be responsible for making sure the family is financially OK. Wrong. There is no shame in being a stay-at-home-dad and these dads should be applauded for the role they play in their children’s lives, whilst their mother goes off to work.

Mike Ansell (Bunbury)
Director, Business Advisory and Chair of the South West branch of the Australian Institute of Company Directors (AICD) and the Bunbury Port Community Consultative Committee, and member of the South West Cycle Club

Q. What led you to get involved in the AICD and the Bunbury Port Community Consultative Committee? 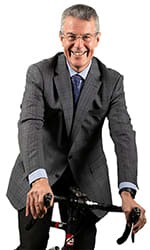 A. Getting involved with AICD was easy as they provide an excellent course for directors and I like to keep up to date with things. In regard to the port, I like to know what is happening in my community and the port is an important part of it.

A. My wife has been fantastic to me as I work long hours and I have been on a number of community boards over the years. She is a fantastic sounding board for any of the day-to-day issues that I face!

A. Things are a lot more public today than previously, which is a good thing! For example, the #metoo movement. Gone are the days where the men go to work and come home and expect their wife to have everything done around the house. Often the wives are working as well, and they expect greater support around the house and looking after the family.

A. Men have a very important part to play as in many cases it is the men who are making the decisions leading towards gender parity, as often there are still more men in management positions than women. This is changing slowly, and men are now seeing the benefits of having a more diverse management team.

Domenic Zappa (Perth)
Manager, Assurance & Advisory, Council Member for the City of Wanneroo, and board member of the Hepburn Centre

Q. What’s the most rewarding thing about the work you do on the board of the City of Wanneroo?

A. The most rewarding thing about the work I do as a member of the City of Wanneroo’s Council is being able to work with a wide variety of people from all walks of life and community groups to solve problems that will create real change within the local community we all live in.

A. The discussion around mental health is one of the major issues affecting men of all ages today. Men are known for bottling things up and on average, one in eight men will experience depression and one in five men will 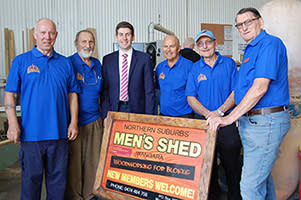 experience anxiety at some stage of their lives. Most of us also say that we feel uncomfortable asking mates for help.

My role has seen me get involved in supporting the continued work of local men’s sheds. When it comes to issues of men’s mental health and wellbeing these sheds provide a place to foster social inclusion which is critical in tackling mental health issues such as depression, especially among older men who have recently transitioned out of the workforce or have lost their wife or partner.

A. To achieve gender parity in all aspects of corporate structures and on boards, we must first tackle our unconscious biases and as such, this is one of the key conversations men must have with themselves and others to close the gap. It is important that for men who aspire to become members of boards and leaders of organisations to become self-aware of any unconscious biases they might have which would prevent the achievement of gender parity, and seek change to recognise the benefits of having gender parity on boards and in the workplace.

Q. What led you to get involved in the Manjimup Primary School?

A. Getting involved with the school board was due to my wife being a teacher and my children attending the school. The principal and I had a pretty good out of school relationship and he thought that I could provide some real leadership qualities to the group. They had 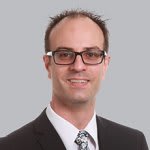 just lost the previous chairperson and needed a replacement. It's really great to be involved in the school board as you can see some of the decisions we are making flow through to the teaching and then to the students, as it’s about the kids.

Coaching my kids and their friends is the best thing you can do, the joy on their face when they accomplish a target that we have set is exhilarating. Kids love to play sport, and it’s a time for kids who aren’t that academic to be in the spotlight. When they score a goal or take a big mark or something, it’s a great feeling.

I have always thought of myself as a giver, whether it be giving skills to kids, advice to other board members, teaching my fellow staff members, or even my clients. I think it’s important to be continuously growing and if I can help somebody grow a little bit then I am growing at the same time.

My biggest influences would have to be my father and my uncle, both very generous people who again made their mark on society by giving. My wife has also had a huge impact on me as she has taught me so much about how to teach and impart knowledge on to the people around me (obviously her teaching skills have been pretty important).

I don’t know if it is just isolated to the regional areas, but men still have a big problem about being able to openly discuss how they feel. Stress is a major health factor and men feel that it is their job to make sure they hold it all together for the families. This is not the case, a man that can talk openly, and perhaps even shed a tear in public, is worth more to the family than anything. R U OK and the Regional Men’s Health initiative are very important organisations and there are so many more.

Men/fathers need to play a big role in directing their children, not just their sons but both sons and daughters, and teach them that both genders are equal for everything. Why are the kitchen toys always pink? Why can’t we buy the kids an iron that is green? It is okay for boys to be in the kitchen, it’s okay for girls to be in the garage. Men need to drive this as much as women, and the place to start is with letting toys be toys, we need to stop the gendering of toys.