With the economy remaining sluggish and government beginning to reign-in spending, businesses and agencies continue to seek out cost reductions and efficiencies. With most having already taken the obvious tactical decisions, there is an ongoing focus on finding and achieving sustainable savings.

RSM has responded to this challenge through the development of a rapid and sustained cost reduction approach to help organisations identify, achieve and sustain substantial new savings while maintaining or even improving customer satisfaction and business outputs.

Rather than tactical cost cutting, RSM advocates the consideration of change that reduces complexity and operating costs which can be sustained over the medium to long term. The key is to take a broad prospective and to apply a holistic approach.

Achieving and sustaining cost reductions is particularly difficult for organisations that are ‘process-intensive’. These organisations are typically characterised by complex end-to-end business processes executed by highly skilled specialists, involve large numbers of diverse customers or suppliers, or operate complex supply chains. Often they include organisations that are asset intensive in nature. Examples of process-intensive industries include: Aviation, Telecommunications, Energy, Water, Transport and Public Healthcare.

The complexity of process-intensive organisations means that traditional approaches to reducing costs often fail outright, or fail to deliver sustained reductions over the longer term. In RSM’s experience the cause of these failures can be traced to:

Many cost cutting reviews, often due to management concerns about industrial relations and worker morale, limit their engagement to managers and executives, ignoring the ‘workshop floor’ when undertaking analysis and forming recommendations.

However, in process intensive organisations it’s often the workers who have the best insight into where costs can be most easily reduced. Failing to engage them overlooks the knowledge and insight they have, and can also reduce acceptance of the changes they are asked to action.

RATHER THAN TACTICAL COST CUTTING, RSM ADVOCATES THE CONSIDERATION OF CHANGE. THE KEY IS TO TAKE A BROAD PROSPECTIVE AND TO APPLY A HOLISTIC APPROACH.

Many organisations make the mistake of enacting savings by cutting the budgets of business units and divisions, and then relying on managerial action to make change happen.

However, in process-intensive organisations many managers are in their positions because of their specialist knowledge or qualifications, and typically have little experience conceiving and implementing sustainable cost reductions. This leads to the taking of tactical actions (e.g. delaying or suspending expenditure), rather than finding savings that will endure.

Many process-intensive organisations have strong cultures that prioritise process execution and reward compliance with polices and rules. In extreme cases these cultures can actively discourage innovation. Unless the culture is addressed, savings will erode over time as revised processes again become outmoded. A concerted focus on establishing and maintaining a culture of continuous improvement is required to sustain lower cost operations.

Many process-intensive organisations have governance rules that require the detailed analysis of any change before allowing it to proceed. While there are often good reasons to be risk adverse (for example, the relative cost of a change that closes down a manufacturing line), a ‘one-size-fits-all’ approach can delay the achievement of easily implemented low-risk cost reductions and therefore create a bigger problem when facing exogenous financial pressures (such as the arrival of competition).

In process-intensive organisations, it’s often the workers who have the best insight into where costs can be most easily reduced. 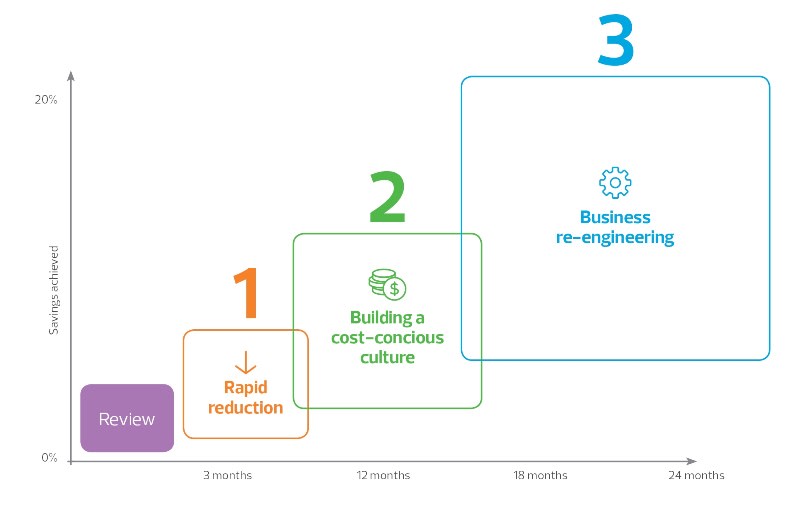 Further to taking a broad perspective, achieving sustainable cost reduction requires a holistic approach that critically examines the status-quo in respect to:

A key difference in seeking out sustainable cost reductions is to not only examine individual areas or business units, but to equally focus on cross-organisational processes and the organisation’s structure with an emphasis on complexity reduction and simplification; especially at process hand-over points between business units.

Taking steps to building a culture that is ‘cost-conscious’ should also be a key focus and is fundamental to achieving sustained lower cost operations. This requires organisations to engage staff in identifying and acting on cost reduction or performance improvement opportunities.

We work with organisations to build a cost-conscious culture where staff are aware of and can take action to manage the costs in the things they do.

Insurance in the digital age

A review with a large Australian insurance provider discovered that poor integration with downstream processes was reducing savings from its new online claiming channel.

It also highlighted that the core business processes had not kept pace with contemporary business practices. 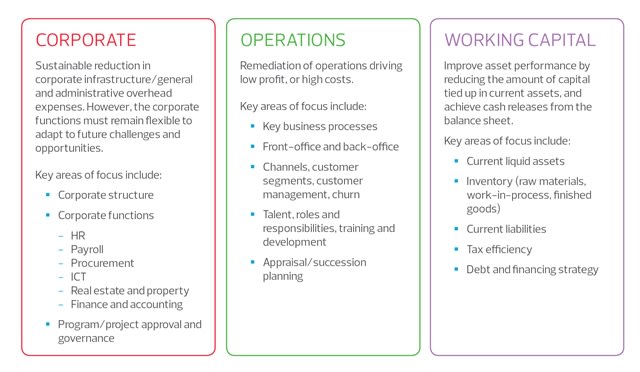 The review resulted in $13m p.a. in ‘quick win’ savings and $60m p.a. in transformational savings that could be achieved over 18 months, by:

A review with a major hospital found that significant savings could be made through the optimisation of its large workforce of non-clinical technicians (electricians, electrical engineers, IT network engineers, etc.). The change commenced with a review that demonstrated that most technicians spent just 40% of their time doing actual work or repairs. The root cause—poorly designed preventative maintenance schedules leading to a high rate of unscheduled maintenance, task planning that did not consider the impact of staff moving between jobs across a large campus, loose responsibilities, and a culture that over-prioritised labour costs control (i.e. overtime minimisation), over efficient job completion.

The review found that most technicians spent just 40% of their time doing actual work or repairs.

A review of cardiology services (statewide) revealed significant opportunities to improve efficiency and effectiveness within the constraints of the existing CapEx and OpEx budgets. Through the implementation of some simple process changes it was estimated that savings in the order of $16m p.a. would be achieved within just 3 months of the review.

Some of the savings were counter intuitive. For example, changing policy to allow qualified nurse-practitioners to supervise ‘ECG stress tests’ (a practice accepted to be safe when an emergency department (ED) is very busy), meant the hospital would forego around $180 in Medicare benefits per patient (due to Medicare’s claiming rules). However, the cost savings from earlier discharge of cardiac patients cleared of heart-attack through more prompt testing were in the order of $500 per patient; to say nothing of the impact on ED waiting times.

It was estimated that savings in the order of $16m p.a. would be achieved within just 3 months.

A review of a government agency’s recruitment function revealed that it operated a ‘firehouse’ model, where its recruiters would leap into action when a position became vacant. This, in-turn, had led to resourcing levels designed to meet the ‘peak load’, with the recruitment team often finding work to keep themselves busy when the fire bell was quiet.

The review proposed changes to dramatically reduce costs by more than 70% and which would also improve the ‘time to hire’.

The principle strategies being a change from just ‘recruiting for a vacancy’ to also ‘recruiting for forecasted vacancies’, the adoption of less bureaucratic processes for engaging candidates and conducting interviews, and adopting targeted candidate attraction strategies over traditional print media advertisements.

The review proposed opportunities to dramatically reduce recruitment costs by more than 70%.

RSM recommends a combination of methodologies and strategic analyses when considering rapid and sustained cost reduction, such as our modified LEAN and Six Sigma methodologies.

Our modified LEAN method (illustrated below), takes the well-known and rigorous LEAN approach of five stage-contained phases: Define, Measure, Analyse, Improve and Control. However we have modified its focus to extend beyond the traditional focus on business processes (against current operational and capital constraints), to also more deeply consider the degree to which the organisation is conscious of its costs, and to facilitate a culture of action-taking to control costs, by those best placed to do so.

This expanded focus includes examining the roles and responsibilities of staff, KPIs used, policies and workplace culture is optimised for their particular business objectives and strategy, whether the business operates contemporary business processes, offers contemporary channels, and has contemporary services, and to listen and hear how the customer experiences the service, and to take action accordingly. 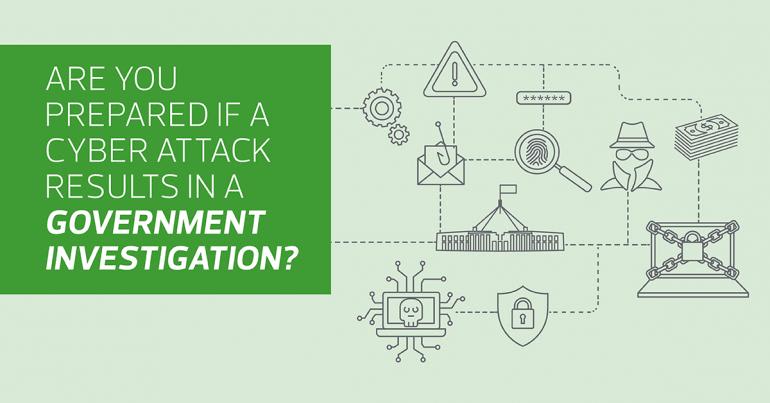 14 May 2020
Understanding cyberattacks and best practices in triaging breaches