Home / Farm Management Deposits - do you have a plan for the end?
Share Print

Farm Management Deposits - do you have a plan for the end?

They continue to be an extremely valuable tool for averaging the annual income of Primary Producers which ensures a more balanced and manageable annual tax liability to help even out the good and bad years.

From 1 July 2016 the maximum amount an individual can hold in FMDs increased from $400,000 to $800,000. This will be of great benefit to larger farming operations. The increase in FMDs allows them to decrease their tax burden and provide greater security in the face of poorer seasons and possible droughts.

Whilst there are many positives in accessing the greater limits, careful consideration needs to be given to the negative implications of individuals having a balance in FMDs excess of $400,000. The hardest impact is felt once an individual ceases to be a Primary Producer, as they are required to withdraw all FMDs within 120 days.

In the event of death of a Primary Producer, all FMDs are assessable in the Final Tax Return for the deceased taxpayer covering the period up to the date of death. For the older generation involved in the farm, care needs to be given to the level of balances held in FMDs. For example, if a balance in excess of $400,000 is to be included in the final return, the tax payable may end up being more than if the FMDs had been not used as a tax planning tool in the first place.

In many instances, the solution is to remain part of the farming operation and continue to receive a distribution of Primary Production income with FMDs withdrawn over time.

This enables a lower average rate of tax to be achieved on the FMD funds as they come out.  For balances in excess of $400,000 this may take up to a decade or more to achieve. 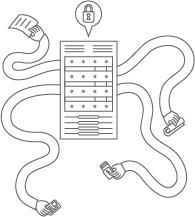 A balanced approach to FMDs involves having the younger generation holding the majority of the funds in FMDs. It is also important to incorporate other tax minimisation tools such as deferred income, prepayments, and concessional superannuation contributions into your annual planning.

A review of the farming operation’s current structure is also important to ensure you achieve the most tax effective outcome. The inclusion of a Company into the organisation’s structure can prove valuable for the older generation of primary producers and may in fact be an alternative to FMDs at some point along the way.  Families can look to obtain advice around achieving an acceptable average rate of tax over time, incorporating the advantage of the maximum corporate rate of tax of 30% and the use of FMD’s in a way that is most effective for your family situation.

The use of a company in the group structure can help smooth out taxes otherwise payable but it will ultimately depend on where the cash is needed and when.  Companies survive the death of the individuals behind them and so, if appropriate, can be used to hold cash and extend the time period over which taxes might be paid on dividends as the cash comes out of the company structure.  Not only can this be used as an effective succession tool for those retiring from the Farm but it can also assist with estate planning matters. Ultimately each family situation is unique and it is essential that you seek advice on the impact of changing your group structure or putting in place a structure for the future.

Do you have a large balance in FMDs and no clear plan as to how they will come out without paying the highest marginal tax rate?

Our Business Advisory team can assist you with ensuring you have a balanced approach to FMDs and that you have a solid plan for the end game.