A new approach to lease accounting

On 13 January 2016, the IASB published the long-awaited IFRS 16 Leases, which has been adopted as AASB 16 in Australia.  The project to issue a new leases standard began in 2006, primarily in response to user concerns about off-balance-sheet assets and liabilities arising from operating leases, and resulted in multiple exposure drafts and discussion papers.

The new standard will be effective for periods beginning on or after 1 January 2019. Earlier application will be permitted for entities that also apply AASB 15 Revenue from Contracts with Customers before 1 January 2019.

RSM Observation:  For most Australian entities, the new standard will come into force for the financial statements for the year ended 30 June 2020.  However, entities should consider whether to early-adopt by one year in 2019.  This would mean that the new lease standard would be adopted at the same time as AASB 15 Revenue from Contracts with Customers and AASB 9 Financial Instruments.  Adoption of all three new standards at the same time may make the transition process smoother, and increase the year-on-year comparability of financial statements.

AASB 16 will affect all entities that enter into lease arrangements, in particular those who currently have operating leases. Recognising new lease assets and liabilities will significantly affect key metrics, such as debt-to-equity ratios and EBITDA, and may hold implications for debt covenants. In preparation for AASB 16, we suggest entities consider the terms of their ongoing leases and new leases, and the implications for future financial reporting.

The effects of implementing AASB 16 may be wider than just the finance function, as it may require input from operational and property functions.  In many cases, the information necessary to implement the new standard may require a specific data-gathering exercise, which may involve the review of a mixture of paper and electronic documents, and some changes to IT systems may also be necessary.  We recommend that all affected entities undertake an impact assessment as soon as practicable.

AASB 16 requires entities to follow the process below in accounting for contracts which may contain a lease. 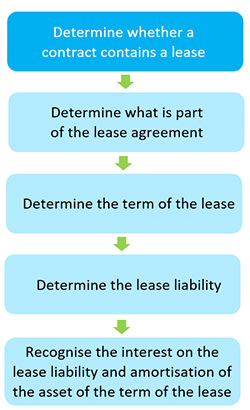 All existing leases will be required to be reassessed when AASB 16 is adopted.  However, for existing contracts, previous conclusions reached on whether an arrangement contains a lease under Interpretation 4 can be ‘grandfathered’ as long as this approach is applied uniformly.  A lessee is permitted to apply either a fully retrospective approach in accordance with AASB 108 Accounting Policies, Changes in Accounting Estimates and Errors, or a modified retrospective approach whereby the lessee recognises the cumulative effect of applying AASB 16 in the opening balance of retained earnings without restating the comparatives.

Learn more on the new approach to lease accounting;

Determination of whether contracts contain a lease >>

what is part of the lease contract >>

Accounting for the Lease >>