The rise of blockchain - threats and opportunities for businesses

To answer this question, this article discusses how blockchain technology is impacting financial services, trading services, and intermediation services. The long-term implications of blockchain technology for businesses in these sectors are potentially revolutionary. In this context, “long-term” may mean as soon as five years.

Before diving into blockchain impact, let's do a quick recap so that we share a common understanding of this technology and the hurdles it faces. Blockchains are large, distributed databases that have a mechanism for replicating transactional data in real time while employing cryptography to guard against unauthorised tampering. In addition, blockchains are transparent—all parties to a given blockchain see all the transactions recorded therein. For a closer look at blockchain technology, our team has put together the infographic below: 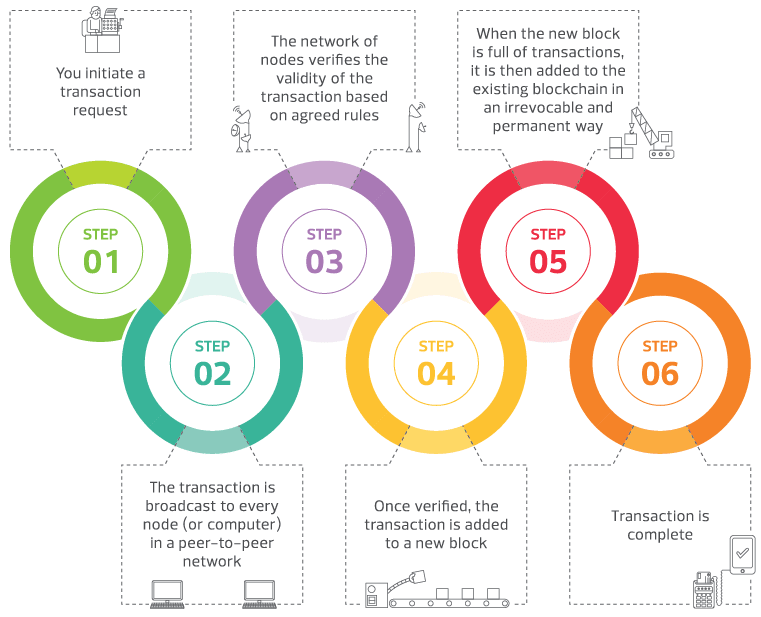 To emphasise, our team believes that the most important blockchain features are decentralisation and openness which can enhance data incorruptibility, transparency and security. This combination holds great opportunities for creative applications of blockchain by both large companies and start-ups.

As mentioned at the start of this article, we will go beyond bitcoin and discuss potential threats and opportunities for these three sectors as blockchain technology cuts both ways. Next, we will discuss specific case studies of successful applications to provide inspiration for businesses that seek to leverage blockchain technology:

Traditionally, when a person wants to remit money across borders, the money flows through multiple banks and intermediaries. The whole process usually takes at least one working day and the remittance fee is a significant cost (7.09% global average1).

However, sending money through a blockchain-based remittance company is much cheaper and faster. For example, in the Philippines where there is a large community of citizens working overseas and remitting money home, cryptocurrency transactions within the country reached a monthly average of over US$6 million in 20172, three times the volume seen in the previous year. Local start-ups that are exploiting the potential of blockchain include Coins.ph and Salarium.

Robert Serpollet, global head of trade operations at Louis Dreyfus, claimed that the time spent on processing documents and data had been reduced five-fold with blockchain. But how exactly has blockchain facilitated this enhanced efficiency? There are two features that helped:

The blockchain is a highly effective and trusted framework for participants to directly interact with each other and enhance trust. This is particularly helpful for the healthcare industry where an estimated 5-10% of healthcare costs are fraudulent. In the United States alone, medicare fraud, e.g. excessive billing, caused around $30 million in losses in 20164.

For example, when an insurance company receives a claim request from a healthcare insurance policy holder, their system will verify his/her medical records and other information in the blockchain. Thereafter, the claim will be approved automatically provided the requirements are met (smart contracts). This simplifies the whole process and reduces fraud as well as manpower cost.

While these changes sound rather revolutionary, it's important to remember that blockchain technology is in its infancy. In our opinion, the biggest issue with blockchains is to work out how to better balance the need for transparency versus anonymity. Blockchains associate all transactions with users identified by a blockchain address. As pointed out by Mr. David Bartlett, RSM’s economic advisor, full commercial exploitation of blockchain hinges on the resolution of certain regulatory issues, such as configuring distributed ledgers to comply with the “Right to Be Forgotten” provisions of the European Union’s upcoming General Data Protection Regulations.

Businesses from the financial services, trading services, and intermediation services should track the ongoing blockchain developments and act now if they don’t want to be left behind. In terms of immediate next steps, these businesses may wish to consider:

Though the above strategy sounds counter-intuitive, it is clear that businesses generally respond head-on to challenges associated with emerging blockchain technologies. Your business has deep expertise in your industry and it is no surprise that you should look to leverage this amidst potential blockchain disruption. Good luck!